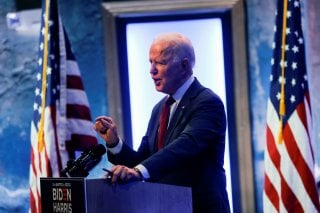 Democratic presidential nominee Joe Biden’s campaign launched nearly immediate attacks at President Donald Trump after a bombshell released by the New York Times uncovered that the president avoided paying income taxes for ten of the fifteen years prior to getting elected in 2016.

The campaign broke an ad via Twitter late Sunday evening that compared a number of U.S. taxpayers including nurses and teachers and their respective income tax burdens to the $750 in federal income taxes paid by Trump during his first year in office, according to the New York Times’s report. The ad serves as the first official response by the Biden campaign, which comes less than forty-eight hours ahead of the first presidential debate Tuesday.

Just hours before the ad hit Twitter, the Biden campaign also found means to fundraise off of the explosive unraveling, by selling “I paid more income taxes than Donald Trump” vinyl stickers.

After the New York Times published the report Sunday, Trump dubbed the findings as “totally fake news” and denied the legitimacy of the story at a press conference.

The report detailed Trump’s finances that raised numerous questions about the potential financial loopholes taken to lessen paying the proper amount of federal income taxes. It discovered that the president is boiled in hundred of millions of dollars in debt, as he lost money through Trump Organization businesses, while also finding that he wrote off questionable business expenses, with one being hairstyling-related.

Democrats swarmed Twitter, taking shots at the president after the report was published.

He contributed less to funding our communities than waitresses & undocumented immigrants,” Rep. Alexandria Ocasio-Cortez (D-N.Y.) tweeted. “Donald Trump has never cared for our country more than he cares for himself. A walking scam.”

"Shock of shocks! Donald Trump, the self-proclaimed billionaire, received a $72.9 million tax refund from the IRS while not paying a nickel in federal income taxes in 10 out of 15 years," Sen. Bernie Sanders (I-Vt.) added. "Yep. Trump l-o-v-e-s corporate socialism for himself, rugged capitalism for everyone else."

Biden hasn’t released an official statement on the matter.