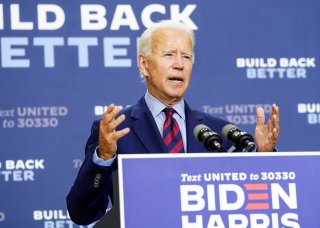 The race for support between President Donald Trump and Democratic presidential nominee Joe Biden in the crucial, battleground state of Florida has tightened, as waves of undecided voters are choosing to back the president in November.

While Biden is leading Trump 49 percent to 46 percent, with 5 percent still undecided, “those undecideds are breaking for Trump 4:1, resulting in a statistical tie at 50 percent for each candidate,” according to the Florida Atlantic University Business and Economics Polling Initiative (FAU BEPI), who conducted the poll.

“The number of undecideds is very low compared to past elections. There are not a lot of people to persuade in this campaign. It is about getting your voters to the polls,” Kevin Wagner, a professor of political science at FAU and research fellow of the Initiative, told the National Interest.

About 9 percent of surveyors said there is a chance they will change their minds in terms of who they will back on the presidential ticket, while 91 percent said they will “definitely” stick with their candidate.

Back in March, FAU conducted a similar poll and found Trump leading Biden 51 percent to 49 percent, but then Biden later raked in widespread support as he held a 6-point lead over the president at 53 percent to 47 percent.

“This poll is consistent with our understanding that Florida is a divided state and will continue to be one of the key swing states for presidential elections,” Wagner said. “It is a state that either party can win.”

Among Trump supporters who participated in the poll, 72 percent said they are “extremely excited” for the election, with 60 percent of Biden supporters saying the same.

Trump also experienced an increase in his job approval rating in the Sunshine State, compared to the same poll conducted in May, as 47 percent of registered voters approved of the job he’s doing, up from 43 percent in May. The president’s disapproval, however, jumped 3 percent since May, polling at 49 percent, compared to 46 percent.

The economy was a top issue for Florida voters at 37 percent, followed by the coronavirus at 17 percent and healthcare at 14 percent. Other issues that were in the ranking were racism/equality (10 percent) and foreign policy (9 percent).

“My expectation is that Florida will continue to be very close. We are going to track that in subsequent polls,” Wagner said.

The survey of 631 registered Florida voters was conducted Sept. 11-12, with a margin of error of plus or minus 3.8 percent.