After Months of Saber-Rattling, Iran and Azerbaijan Restore Friendly Relations 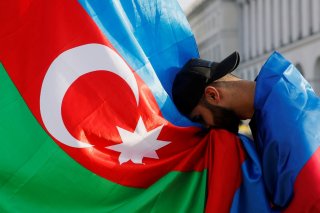 In September 2021, relations between Tehran and Baku went south after Azerbaijani officials expressed their dissatisfaction that Iranian trucks were illegally crossing into Karabakh without Azerbaijan’s permission. Iranian officials rejected the allegations and accused Baku of offering its territory to Israel to spy on Iran. Then, Iranian military forces held significant maneuvers near the border with Azerbaijan to issue a stark warning to Baku. Now, the recent misunderstandings have been resolved, and tensions subsided. The two neighbors are blaming “ill-wishers” for the near confrontation, and both are interested in normalizing their bilateral relations.

The presidents of Azerbaijan and Iran met in Ashgabat on November 28, 2021. “From now on, Iranian-Azerbaijani relations will develop in all areas,” Azerbaijan’s President Ilham Aliyev told reporters following the signing of a bilateral agreement. “Our peoples are fraternal peoples, our countries are fraternal countries, and the issues discussed show today again that Iranian-Azerbaijani relations are at a very high level.”

“The hearts of the peoples of the two countries beat together,” Iranian president Ebrahim Raisi said at the joint appearance with Aliyev. “We must never allow others to interfere in our relations. We must resolve our own problems, work together to advance our relations, and deepen mutually beneficial cooperation.”

In fact, the November meeting between two presidents amounts to a watershed moment for the two countries’ diplomatic relations, which were established in 1992.

In addition, Iranian foreign minister Hossein Amir-Abdollahian's visit to Baku in the last days of December created an opportunity to review the common issues and joint action plans between the two countries for the following year. His visit has amounted to a harbinger of Iran and Azerbaijan’s ambitions for friendly relations and partnership.

Additionally, Azerbaijani foreign minister Jeyhun Bayramov expressed his view about joint projects implemented by Iran and Azerbaijan at a joint press conference. The minister mentioned the construction of the Khudaferin, Gyz Galasy, and Ordubad power plants, as well as the construction of a bridge across Astarachay, further development of the Iran-Azerbaijan-Russia corridor, and the launch of a joint automobile plant in Neftchala.

Analysts see the roadmap for new mutual projects as an effort to restore damaged relations between the two nations. In a new agreement that is the first tangible result of Iran’s proactive diplomacy in the Caucasus, both have committed to cooperate on the transit of Turkmen gas, a trilateral gas swap deal for up to 2 billion cubic meters per year.

For the Islamic Republic, the most important benefit of the agreement is that while transferring gas from Turkmenistan to Azerbaijan, Iran will receive some gas for its five northern provinces as transfer rights. With this procedure, the stability of Iran's gas network will be ensured in the region.

Also, the three states’ proximity to Russia has brought new energy opportunities to the trilateral agenda. For example, a project intended to synchronize the electricity networks of Iran and Russia through Azerbaijan will start in April. Mohammad-Ali Farahnakian, Iran’s deputy energy minister for international affairs, said that the project’s primary studies have already been conducted. “The project’s executive operation is expected to begin in late April after all three countries send comprehensive reports to the Iranian consultant of the project,” he added.

As two Muslim neighbors with a common religion, language, and culture, Iran and Azerbaijan have significant capacities to further develop their relations. Recently, Iranian energy minister Ali-Akbar Mehrabian said the country is ready to construct joint power plants with Azerbaijan.

Mehrabian made the remarks in an online meeting with his Azeri counterpart, Parviz Shahbazov, saying: "Connecting Iran's electricity network to Russia through the Republic of Azerbaijan is important for strengthening trilateral relations."

With a 750 km-long common border and four formal border crossings, there is also mutual interest in developing Iran-Azerbaijan road transportation and removing barriers to bilateral trade. Head of the State Road Transport Service of Azerbaijan Republic Anar Rezayev underscored the necessity of bilateral transport collaborations and how the two nation’s long history and shared commonalities would ease future cooperation.

One of the most significant problems between Iran and Azerbaijan has been the presence of Israelis in Azerbaijan and the warm military ties between Baku and Jerusalem. Azerbaijan has formally recognized Israel since 1992. While Iranian officials have frequently stated that Iran will not tolerate Israel’s presence near its borders, some observers believe that the close military cooperation between Israel and Azerbaijan has galvanized the Islamic Republic.

After recent diplomatic outreach between the two sides, Iran has begun to accept Azerbaijan-Israel relations and is no longer calling for an end to Israel-Azerbaijan military relations. In fact, Iran cannot demand that its neighbors end their cooperation with Israel given that the United Arab Emirates, Bahrain, Russia, and some others have good relations with Israel. Thus, Iran is being forced to show more flexibility in its desire for regional cooperation.

Some analysts believe that another reason for recent reconciliation is that compromise with Baku will help Tehran effectively compromise its western borders. Iran is dealing with a host of problems, including an economy hobbled by crippling U.S. sanctions, domestic unrest, and an uncertain relationship with the Afghan Taliban.

Notably, diplomacy to revive Joint Comprehensive Plan of Action are underway in Vienna between Iran and world powers. After the withdrawal of the United States from the deal in 2018, Azerbaijan has remained steadfast in its desire to expand its cooperation with Iran. As a result, if the negotiations produce a deal and remove international sanctions, Azerbaijan stands to benefit from additional trade with Iran.

Although Azerbaijan and Iran have not forgotten their past disputes, the two sides have no interest in resuming tensions. On the contrary, while Raisi has made a centerpiece of his agenda improving Iran’s relations with its neighbors, both countries have concluded that they have an interest in further improving their relations together in the future.