Arab-Israeli Peace Is Occurring Before Our Eyes 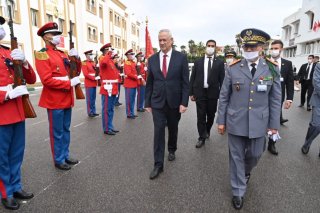 Sometimes the very things that suddenly seem normal tell you how much the world has changed.

While Americans were traveling for Thanksgiving, Israel’s Minister of Defense Benny Gantz arrived in Rabat to sign unprecedented security and intelligence agreements between the Jewish state and the Atlantic Arab state. Little more than a year ago, such an official visit, let alone the signing of mutual cooperation agreements, would have been unthinkable. This past week, the Moroccan press largely covered it as an important event.

It is the latest in some twenty agreements signed between Israel and Morocco.

Nor is Morocco alone among Arab states. Under the Abraham Accords, three other Arab lands have officially made peace with Israel and opened their borders to merchants, traders, and pilgrims. This week marks the second year in a row that Jews are openly celebrating Hanukkah in the United Arab Emirates. Arab tourists are visiting Israel in increasing numbers, from Tel Aviv’s beaches to Jerusalem’s holy sites.

This year, some hundreds of thousands of Israeli tourists have booked hotels in Morocco. Israeli investment in the Gulf Arab states is fueling high-tech startups while Arab investment in both Israel and the Palestinian territory is growing rapidly. Less than two years ago, most Arab nations would not admit travelers who had Israeli stamps in their passports. Now that restriction is gone and millions of Arabs and Israelis have visited each other. Indeed, all of these things have become so common that they are no longer remarked upon.

Count me among the many Arabs who have long believed that the peace plan deserves a chance—although one of the few to say so publicly. Now it is a reality.

If the Arab street has anything to say about it, more Arab nations will make peace with Israel and begin trading and investing with the nation that some Arab state-run broadcasts still refer to as the “Zionist entity.” Many Arabs in Iraq, Syria, and Libya, courageously, without fear or hesitation, now say that they favor normal relations with Israel. The momentum for peace across the Arab world is real and growing.

This normalization process is being carefully watched across North Africa and the Middle East. The best way to bring more Arab nations into the fold is with a relentless march of completely normal events: friendships struck at business events, visiting students and scholars quietly learning that “the other” isn’t really so different after all, diplomats and generals working across borders to stop anarchists who express themselves with bombs, not words. The cumulative impact of these quotidian events will do more to increase the momentum of the peace process than any speech or sermon.

Behind this historic achievement was a man who believed, who fought, and who faced the rejection of large swathes of the American Establishment: Jared Kushner. In a better world, he would share the Nobel Peace Prize. In our world, his reward is measured by the many enriching encounters between Israelis and Arabs that simply would never have occurred as recently as a year ago.

Kushner’s great insight was that the younger Arab generation has a fundamentally different perspective from that of their elders. More than 60 percent of Arabs are too young to remember the 1967 and 1973 wars with Israel, and many more consider them to be ancient history. As a result, young Arabs widely accept Israel's existence as a given and generally view trade with its thriving economy as essential to their own personal prosperity. They want ordinary things, Kushner realized: a steady job, a nurturing school, a safe street, and a durable reason to hope that things will get better. The Abraham Accords that Kushner championed made all of these things a real possibility for the first time since 1948.

The Biden administration was right to signal its support for the signed peace agreements between Israel and Arab countries. This too helped accelerate the momentum for peace.

If the wave of peacemaking translates into tangible benefits for Arab youth, pan-Arab support for peace with Israel will only grow.

This time of year in America, it is common to pray for peace.

Simply put, security and prosperity demand peace between people. The Biden administration should accordingly push for a broader effort at cultural reform with the potential to generate the popular support necessary to sustain a peace process.

Doing so means urging and equipping Arab allies to roll back generations of rejectionist messaging in Arab establishment-owned media, mosques, and schools. It means supporting the rising tide of bold, grassroots Arab voices that have been calling for specific relations between Arabs and Israel.

Rather than returning to the old cliches of the “peace process,” the United States could encourage America’s diplomats and scholars to see the extraordinary power in ordinary things.