The Air Force's Sixth-Generation Aircraft Could Be Epic 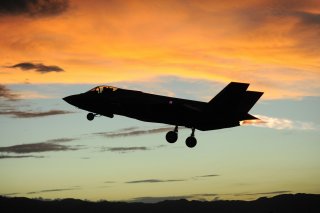 Could enthusiasm for the fast-progressing and now airborne U.S. Air Force sixth-generation stealth fighters have led some senior members of the Air Force to suggest a massive cut to the F-35 jet program?

While there is little available data regarding any configuration or mission scope for the new sixth-generation aircraft, recent comments from senior Air Force leaders and developments over the last several years seem to inculcate that they are most likely not intended to be a one-for-one replacement, meaning that a sixth-generation aircraft would not be a next-generation F-35 jet in any capacity. Rather the opposite appears more likely, meaning both a sixth-generation stealth fighter and a fifth-generation multirole F-35 jet will each respectively possess attributes and characteristics the other does not have.

It seems much more likely, given that the F-22 jet was, at least in the minds of many people, prematurely truncated at 187 aircraft, a sixth-generation aircraft might introduce a breakthrough level of F-22-like air dominance.

Perhaps a sixth-generation fighter would vector and maneuver in a manner far superior to even an F-22 jet?

Perhaps it will bring new levels of supercruise speed wherein it can thrust, accelerate, maneuver and out-run attacking enemy aircraft in unprecedented ways?

At the same time, there will likely still be attributes unique to the F-35 jet which, given the pace of technological progress and continued rapid implementation of weapons upgrades through software, may remain the case for many years.

An interesting essay from CNN cites sources saying that some senior Air Force officials during the Trump administration suggested cutting the Air Force’s 1,763 planned F-35 jets to eight hundred to save money on sustainment costs and more fully leverage the fast-emerging promise of the sixth-generation aircraft.

This idea, which may have emerged earlier on in the development of the sixth-generation platform, does not seem to represent the Air Force position at the time and certainly does not reflect what the service is thinking now. Air Force Chief of Staff Gen. Charles Brown has

said the service’s commitment to its planned fleet of F-35 jets remains fully intact, yet there are of course still some ongoing deliberations. As things progress, all indications seem to point to the possibility that a sixth-generation aircraft will operate more as an F-22 replacement intended to complement and fly alongside the F-35 jet.

It may be next to impossible to engineer a single platform that is superior and optimal in every conceivable category, a reality which further fortifies the argument that a continuously upgraded F-35 jet and new sixth-generation aircraft can each bring certain superior attributes to war that the other does not have, creating an optimal combination for aerial dominance.

Both fifth- and sixth-generation stealth aircraft of course extend the much sought after or even needed quality of stealth, fifth- and sixth-generation fighters will likely bring equal if not greater advantages to warfare by building upon current networking progress, meaning they will likely be engineered to quickly network, share information and operate in tandem with one another. Both will likely operate nearby drones and even unmanned ground assets or robots. Current breakthroughs are enabling more secure two-way connectivity between F-22 jets and F-35 jets, a massive intelligence-sharing and targeting paradigm shift breaking new ground in the area of coordinated air attack. This introduces great promise for fifth-to-sixth generation coordination which will likely build upon this progress.

For instance, an F-35 jet with intelligence, surveillance, and reconnaissance capabilities in addition to ultra-long-range, high-fidelity sensor image resolution could draw upon its electro-optical targeting system to locate an approaching fleet of enemy fifth-generation aircraft, and then use its computerized Mission Data Files and artificial intelligence-enabled sensor fusion to make rapid target identification. Bouncing incoming threat data off of a vast database to perform rapid analysis and then quickly organize a host of otherwise disparate pools of data in relation to one another for pilots, an F-35 jet could find targets and transmit relevant data to a nearby sixth-generation aircraft positioned to engage and destroy the enemy fifth-generation fighters.