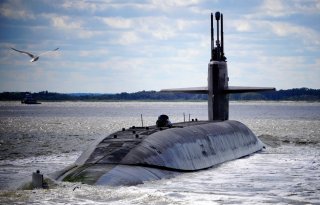 The Navy is looking to specially engineered sonobuoy-carrying submarine-hunting drones to supplement large, fixed-wing, torpedo armed surveillance planes scanning the ocean, as a way to introduce new dimensions of reach, range, image fidelity and targeting to existing efforts to track and target enemy submarines. Newer applications of computer-processing power are making on-the-move command and control closer to the point of attack and better networked to give commanders a faster and more complete threat analysis picture.

Perhaps a drone-launched sonobuoy generates one hundred return renderings of various shapes beneath the surface of the ocean, yet only one or two of them might resemble an enemy submarine of great interest to commanders. In this case, the possibilities for AI-enabled computer algorithms to compare image renderings against a massive database to perform analytics, draw comparisons and offer optimized, streamlined data to human decisionmakers is substantial. Incoming data, which could generate complex and difficult “data overload” challenges, can be organized and communicated with unprecedented efficiency. This concept is, according to General Atomics developers, a large part of the developmental trajectory for its SeaGuardian sub-hunting drone and its expanding mission set.

“We have integrated the ability to process data from sonobuoys,” Bob Schoeffling, the vice president of International Strategic Development for General Atomics Aeronautical Systems, said.

Integrated processing power can organize otherwise disparate pools of incoming sensor data, to enable a kind of interpretive synergy drawing upon acoustic returns from sonobuoys, electromagnetic returns from radar and optical returns from Electro-Optical/Infra-Red cameras. How do datastreams from each of these modes inform or integrate with one another? Artificial intelligence-enabled analytics can discern key nuances and make determinations in near real-time. Ultimately, a key focus of the technology, when it comes to operational application, is simply to reduce sensor-to-shooter times by massively expediting the surveillance and targeting process.

Both operational and cost efficiency concepts continue to inform much of the developmental thinking with the MQ-9B SeaGuardian, as General Atomics intends to offer what Schoeffling referred to as an “ad hoc” anti-submarine warfare capability not otherwise available to commanders. The thinking is the MQ-9B SeaGuardian might offer some unique value, which would be added as a supplement to larger fixed-wing sub-hunting planes like the Poseidon P-8 or simply provide additional options for commanders.

“SeaGuardian is a low-cost platform, it burns 200 pounds of fuel per hour,” Schoeffling added. “Compare that against the larger man-controlled aircraft that burn 5,000 pounds of fuel an hour. It also takes less manpower to run it. So you can perform the mission with fewer people, far less expensively, and have a much more flexible platform because we can fly, depending on how it’s configured, for 25 hours, 30 hours, or 40 hours.”

Interestingly, the MQ-9B SeaGuardian could well be described as the latest and most cutting edge iteration in the MQ-9 Reaper’s multiyear developmental trajectory during which the Hellfire-armed counterterrorism surveillance drone continues to transition into a great-power warfare environment and prepare for massive warfare in a high-threat, highly contested environment against a well-armed, technologically sophisticated adversary. In recent years, for example, the MQ-9 Reaper has been upgraded with added fuel tanks to extend range and dwell time above target and also engineered with a universal weapons interface to massively expand its weapons arsenal. The MQ-9 Reaper now fires the AIM-9X in addition to the AGM-114 Hellfire missile, a five-hundred-pound laser-guided weapon called the GBU-12 Paveway II, and GBU-38 Joint Direct Attack Munitions or JDAMs.