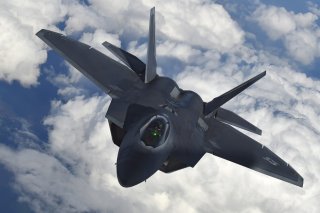 The U.S. aircraft industry is responsible for some of the most advanced fighter designs in the world, shattering a slew of performance records over the twentieth century and repeatedly setting new standards for battlefield performance.

As difficult as it is to distill so few choices from what is an expansive list of contenders, here are five of the best U.S. fighters.

The F-4 had a rocky start as a naval, carrier-based strike fighter—nor is it the best-looking fighter by any stretch of the imagination—but it grew into a potent multi-purpose tool used by all three branches of the US military. The F-4 combined a heavy payload, blistering speed, and a versatile design concept to more than give competing Soviet fighters a run for their money. Despite its age, modified F-4’s continue to fly for several modern-day militaries across the world.

The F-15 was the next big design milestone in US military aviation, inheriting the F-4’s excellent thrust, potent air-to-air arsenal, and a no less capable radar, but adding a renewed focus on close-quarters maneuverability. The result was a fighter truly ahead of its time, handily outperforming some of its lesser MiG counterparts during the Lebanon War and Gulf War and setting a new bar for flagship fighter performance. To date, no fighter is arguably more iconic in US military aviation than the Falcon.

As with the F-4, the F-16 was conceived as an air superiority fighter that gradually morphed into a multi-role aircraft. The F-16 was also a pioneer in avionics, boasting a fly-by-wire system that compensated for its intentionally unstable aerodynamic design to provide exceptional agility. A light, versatile fighter that’s vastly cheaper than the F-15, the Falcon is a rare addition to the US aircraft roster in that it manages to be both cost-efficient and well-suited for a wide array of combat roles.

One of the world’s most advanced air superiority fighters, the F-22 Raptor boasts a weighty list of flagship features: two-dimensional thrust vectoring nozzles, supercruise capability, an cutting-edge avionics and communications package designed for integration with the F-35, compatibility with the latest (for its time) AIM-9X and AIM 120-D air-to-air missiles, and a raft of cutting-edge stealth features to drastically reduce radar cross-section (RCS). In fact, the F-22 might just be so far ahead of much of its competition that—as recently argued by The National Interest—Washington is seemingly reluctant to export a stealth air superiority fighter that advanced.

Undoubtedly a controversial choice to round out this list, the F-35 program encountered no shortage of technical roadblocks and budget issues. As with the F-22, the F-35 is almost entirely unproven in combat— only time will tell how it fares on the battlefield. Nevertheless, there is little question that the F-35 is an amalgamation of some of the most advanced avionics, weapons targeting systems, and stealth features in the world. Once called a “quarterback” in the sky by one of its demonstration pilots, the F-35 uses its forward-looking sensor fusion concept to generate a dynamic picture of the battlefield, feeding live information to nearby friendly units. Its place in this list isn’t so much an endorsement of what it currently is, but a reflection of what it could become.