Analyze This: Could F-35 Jets Be Used for These High-Risk Missions? 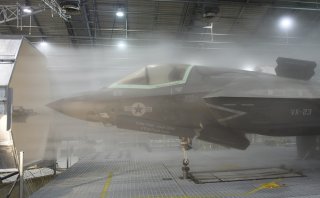 What if, when operating in with a series of complex interwoven threat and attack-vector variables in major warfare amid escalating threats, a small group of F-35 jets was able to perform a series of massive, high-risk missions to quickly achieve war aims and avert protracted and highly lethal extended warfare? What would cost analysts and F-35 detractors say in that instance, should a large and extremely impactful warfare outcome be quickly achieved by a small number of F-35 jets, therefore preventing a need for extended, high-casualty operations? Could the existing F-35s, even if the original fleet-size objectives were upheld, actually save the Pentagon money over the long term while increasing pilot safety?

How does this argument pertain to ongoing Air Force and congressional deliberations about cutting the service’s plan of acquiring 1,763 F-35 planes? Placing this in this light, something which is arguably a more complete and therefore more accurate context, should the Air Force and congressional advocates renew, strengthen or modify essential messaging regarding ongoing F-35 budget deliberations

The flaw, according to the Mitchell Institute paper, is procedural, meaning the methods and criteria used for determining costs and F-35 affordability have not been accurate. The point or principle finding of the Mitchell Institute analysis was to identify metrics sufficient to clearly indicate cost-saving benefits of stealth aircraft when viewed through a lens of mission objectives and successful accomplishment.

“If superior technologies and design allow F-35s to secure mission effects that would otherwise take multiple, less capable aircraft to achieve (and at higher risk), then F-35 jets will actually Drive value across many dimensions of the greater warfighting system . . . Looking to future investments, the concept of “cost” needs to focus less on individual systems and more on the enterprise resources required to achieve mission goals,” according to the paper.

Would using larger numbers of fourth-generation aircraft for longer duration missions at higher risk ultimately cost more than simply deploying a small group of necessary F-35 jets? Depending upon the operational task requirements for a mission, that might be the case. Shouldn’t this kind of equation be of paramount consideration amid ongoing debates about F-35 cost assessments, production plans and fifth-generation fleet size determinations?