Are Russia and Ukraine Headed for War? 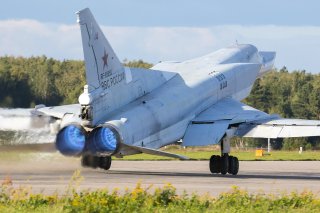 Russia’s Navy has staged a new round of Baltic drills amid spiraling military tensions between Moscow and the West.

A Russian naval aviation group conducted ground strike exercises at a training range in the Kaliningrad region. "In the course of practicing combat training tasks, the crews of about ten advanced fighters and bombers delivered precision bombing strikes on a notional enemy’s command centers, manpower and military hardware,” according to a press statement.

A mixed group of Su-30SM multirole fighters and Su-24 attack aircraft practiced precision bombing strikes against notional enemy infrastructure, including operations against mock command centers and other military fortifications. “The practical operations of the pilots of Su-30SM and Su-24 aircraft were monitored by data recording equipment mounted on the combat planes and also on the ground in the area of the combat employment. The analysis of the data obtained by the recorders showed that all the targets had been 100 p eliminated," the press statement read.

Russia’s heavily armed central European enclave of Kaliningrad has long been a source of anxiety for the North Atlantic Treaty Organization (NATO) central command, and not without good cause. High-profile interceptions over Baltic airspace have become increasingly commonplace, as Russian officials flying to and from Kaliningrad frequently draw the interest of local NATO aircraft. The uptick in Russian Baltic military activity is paving the way for the ZAPAD 2021 exercises this coming September, a set of far-reaching joint drills between Russia’s Western Military District (WMD) and the Belarus’ Armed Forces.

As noted in a 2016 RAND Corporation report, “Reinforcing Deterrence on NATO’s Eastern Flank,” Russia’s heavy military presence in this region is among the leading factors giving Moscow a substantial tactical edge in the Baltic region. The WMD is numerically and-- in most respects—qualitatively superior to NATO’s military presence in the Baltic region. The last ZAPAD exercise, held in 2017, involved as many as 680 pieces of military hardware and drew around thirteen thousand Russian and Belarusian military personnel.

The report found that NATO lacks the conventional means to resist a full-scale Russian invasion of the Baltic states, however unlikely that scenario may be. The Baltic states have taken modest steps in recent years to ramp up their defense spending, but these measures have been more than offset by the Kremlin’s consistent military buildup near its western borders.

As sharp as they are, recent Russian-Western tensions have not been confined to the Baltic region. Kiev and Moscow are again on war footing following a drastic escalation of the ongoing Donbas Conflict, with the Kremlin moving trainloads of military hardware into Russian-occupied Crimea.