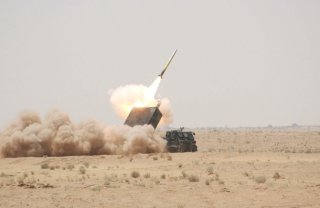 The Army has once again shot off a new generation of land-fired missiles. The goal: to extend attack range and precision targeting for ground forces on the move, while also drawing upon industry innovations to increase range lethality and combat performance.

Earlier this year, Army Vice Chief of Staff Gen. Joseph M. Martin said the Army was developing new “seeker” technology for the PrSM, and now the service has put General Atomics Electromagnetic Systems (GA-EMS) under contract to design, fabricate and test a Digital Guided Missile (DGM) system concept prototype. The system concept will enable new kinds of Non-Line-of-Sight (NLOS) missile targeting capability for the Army, something especially relevant given that the PrSM recently broke a new range record. Combining both new range dynamics with NLOS-targeting technology introduces an entirely new sphere of targeting and attack options for Army ground forces. GA-EMS’s Digital Guided Missile can greatly optimize “cost-per-kill” by firing more submunitions from the PrSM, and these cost advantages will be fortified by much improved lethality by virtue of its ability to automatically recognize targets.  The submunitions are engineered to maneuver and extend beyond the range of the PrSM using “lift-body with wings to give it additional glide,” developers explain.

While the initial application for the new Digital Guided Missile system is slated to improve the PrSM, Army and industry plans include possible additional applications such as use on the service’s Future Vertical Lift and Next-Generation Combat Vehicles programs.

GA-EMS is likely architecting its Digital Guided Missile system with technical standards such that it can easily transition between platforms and upgrade as needed. One reason for this is GA-EMS’s internally funded research and development and digital engineering missile designs

“GA-EMS has more than a decade’s worth of experience developing and advancing hypersonic weapons technologies for the joint service. We develop missile designs that have a digital model grounded with vetted modeling and simulation infrastructures,” Scott Forney, president of GA-EMS, said in a company statement.

PrSM now draws upon GPS and inertial measurement unit technology, yet there are certainly a wide range of innovations related to targeting accuracy, guidance, datalink communication and “hardening.”  Therefore, it would not be surprising if the Army was looking at the GA-EMS technology for hardening its guidance networks and also exploring non-GPS, less-jammable targeting technologies.

"Long-range fires can suppress and neutralize enemy integrated air defenses and enable combined arms maneuver. Combined Arms allows us to close with and destroy an enemy. It requires armor, infantry and combat aviation to work together in a synchronized fashion. If we lose this synchronization we are far less lethal. If an enemy has range, he can separate the combined arms team. Our adversaries have watched us and learned how we fight. They have invested in areas to offset our advantage,” Rafferty told the National Interest.