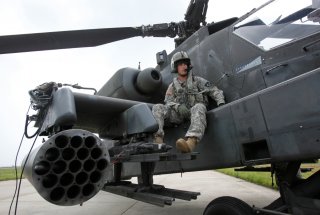 “Don’t forget the upgraded, combat-tested AH-64 Apache attack helicopter” is a sentiment circulating among military planners, innovators and modernization leaders, given concerns that the Apache could get eclipsed, overshadowed or even ignored by virtue of all of the intense focus on the emerging Future Vertical Lift program.

The innovations informing the Army’s Future Long-Range Assault Aircraft and Future Attack Reconnaissance Aircraft are now capturing large amounts of attention given the range, speed and maneuverability, and intended mission scope for the aircraft. However, how many of them will there be? When will they arrive in sufficient numbers? Won’t there still be a need to “mass” force and potentially attack in large formations with a lot of helicopters? In short, a need for the Hellfire-armed upgraded Apache will likely remain for many years.

Former chairman of the Board of the National Guard Association of the United States, Ret. Mai. Gen. Micheal McGuire, served many years as the leader of Arizona’s Army and Air National Guard. Naturally, he is familiar with the Apache given the extent of his combat history high-deployment op-tempo in recent years. He is among those who believe the massively upgraded Apache “E” model needs to remain a priority and fly alongside the emerging FARA.

Referring to Sun Tzu’s well-known belief in the importance of “massing” forces as essential to winning wars, McGuire said in an interview with the National Interest that the Arizona-built Apache could prove critical in the event that the U.S. Army needed to “mass” forces in a major conflict.

“I understand the value of Future Vertical Lift in certain scenarios, but mass matters (referencing Sun Tzu) and if we can't have the ability to move soldiers because we buy so many fewer airframes, then we're gonna have to think through how we get after that without breaking the budget,” McGuire said.

McGuire’s point is likely fortified by the realization that, while originally a 1980s helicopter, upgrades to the Apache make it an almost entirely new platform well suited for a modern threat environment.

Apache pilots in Afghanistan spend many years flying upgraded AH-64E-model helicopters which give the platform increased speed and performance. In development for many years and now part of the operational force, the AH-64E models use a stronger 701D helicopter engine, composite rotor blades, and next-generation communications technology and avionics.

The “E” model is able to transport a larger amount of ammunition and fuel in what is described as “high-hot” conditions at altitudes of six thousand feet and temperatures of 95 degrees or above. The innovations built into the “E” model give the helicopter all of the technological advantages of its predecessor “D” model—yet at a lighter weight making it more maneuverable and effective. The AH-64E Apache is also 20 knots faster than the previous model and can reach speeds of 164 knots.

The current “D” model Longbow Apache is heavier than the original “A” model helicopter; it carries the Longbow radar and significantly improved targeting and sensing technologies, however, it lacks the transmission-to-power ratio and hard-landing ability of the initial “A” model. The AH-64E is engineered such that an advanced, high-tech aircraft the weight of the previous “D” model can have the power, performance and landing abilities of an original “A” model with a much lighter weight.

The AH-64E can destroy armor, personnel, and material targets in obscured battlefield conditions at ranges out to eight kilometers, according to an Army press statement. The “E” model also keeps the millimeter wave fire control, radar frequency interferometer and targeting sensors engineered into the previous Apache version, according to the statement.