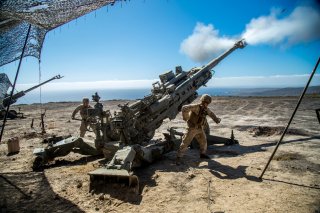 With the arrival of GPS-guided precision artillery and rockets in Iraq and Afghanistan in 2007 and 2008, the United States saw a quantum leap forward for weapons historically thought of as "area" systems designed to blanket a region with suppressive fire to enable forces to maneuver. The advent of weapons such as the Excalibur round, a GPG-guided 155mm artillery shell able to accurately hit targets thirty kilometers away, introduced paradigm-changing capabilities to commanders looking to pinpoint enemy targets without destroying civilians or infrastructure.

This breakthrough, which began roughly fifteen years ago, continues to evolve. Senior Army weapons developers say that yet another generation of precision fire capabilities is beginning to emerge with the advent of new sensors, navigation systems, and targeting technologies.

“The idea of precision used to be that … GPS was considered precision. Now, we can be extremely precise with targeting with sensors, both onboard and offboard sensors. So you can imagine the level of accuracy that we can achieve now with precision munitions. [W]e've completely changed the whole definition of precision," Lt. Gen. Thomas Todd, the chief innovation officer at Army Futures Command, told the National Interest in an interview.

One such example is the Shaped Trajectory 155m artillery round, which can successfully change course in flight to hit previously unreachable targets, such as enemy vehicles under a bridge or on the other side of a mountain. While much of the technical specifics enabling this are not available due to security concerns, the development of this new round is progressing quickly as it nears operational readiness.

Moreover, the Army is also more than doubling the range of its 155mm artillery through the Extended Range Cannon Artillery (ERCA) program, which has already demonstrated an ability to destroy targets out to ranges of seventy kilometers or more. In addition to increasing the range of artillery strikes, ERCA massively boosts precision.

The advent of new technologies of this kind means that Army war planners will need to adjust to more modern applications of combined arms maneuvers to carry out attacks from greater standoff ranges.