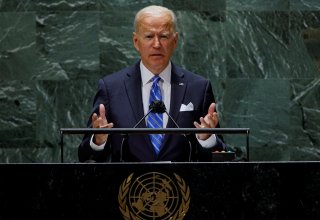 President Joe Biden gave his second address to the United Nations General Assembly in New York on Wednesday, discussing the “great upheaval” that the world had experienced since the beginning of his term—including financial woes, natural disasters, climate change, and the lingering effects of the COVID-19 pandemic.

Throughout the speech, Biden emphasized that the United States had sought to respond to the worst consequences of these crises through humanitarian aid and cooperation with the international community. Toward that end, he claimed that Washington would “not seek conflict” with China, voiced support for a two-state solution to the Israel-Palestine issue, and indicated that he would attempt to rejoin the “Joint Comprehensive Plan of Action,” the nuclear deal signed between Iran and the United States in 2015. Biden also backed several proposals to reform the United Nations Security Council and add permanent seats for countries in Africa, Latin America, and the Caribbean, whose interests he suggested were underrepresented by the body’s current composition.

However, the president devoted most of the speech to condemning Russia’s invasion of Ukraine, which he characterized as a “brutal, needless war … chosen by one man,” Russian leader Vladimir Putin.

“This war is about extinguishing Ukraine’s right to exist as a state, plain and simple, and Ukraine’s right to exist as a people,” Biden said. “Wherever you are, wherever you live, whatever you believe, that should make your blood run cold.” He argued that Putin had instigated the war out of naked territorial ambition—citing the Russian leader’s open support for plebiscites in its occupied territories to annex those areas into Russia—and dismissed his argument that the Kremlin had felt threatened by the eastward expansion of NATO.

“You cannot seize a nation’s territory by force,” Biden said, noting that doing so “shamelessly violated the core tenets of the United Nations Charter.”

Biden’s remarks come only one day after Putin announced on Russian state television that the country’s ministry of defense had begun a partial mobilization of its conscripted reserve forces. Russian officials claimed that the new measures would add up to 300,000 new soldiers to the country’s ongoing war in Ukraine. However, military experts in the West have voiced doubts about the reinforcements’ ability to turn the tide in Russia’s favor—particularly in the wake of several major Ukrainian victories in the country’s northeast.