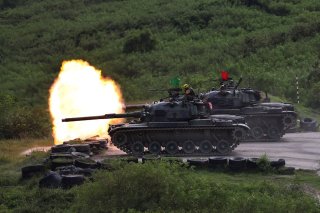 The White House is mulling a sanctions package against China to deter it from invading Taiwan, according to a Reuters report.

Sources familiar with the discussions told Reuters that the deliberations, which are at an early stage and are being considered both in Washington and by European Union (EU) officials, were spurred by escalating tensions in the Taiwan Strait.

The prospective sanctions would reportedly include restrictions on investments with China in the realm of advanced technologies, including computer chips and communications equipment.

Taiwan’s representative in Washington, Hsiao Bi-khim, hosted sixty politicians from Europe, Asia, and Africa in Taiwan’s Twin Oaks mansion on Tuesday to enlist international support in its standoff with China, according to Reuters. The attendees were drawn from the  Inter-Parliamentary Alliance on China (IPAC), an international coalition focused on developing “coordinated responses among democratic states to address challenges posed by the Chinese Communist Party (CCP) to the international rules-based order and democratic principles.”

“We will campaign to ensure our governments signal to the PRC that military aggression towards Taiwan will cost Beijing dearly,” read an IPAC draft pledge obtained by Reuters.

Taipei has reportedly not pressed for concrete punitive measures against China but is asking Western lawmakers to plan the actions it would take if Taiwan was attacked by China. But the idea of levying major sanctions against the world’s second-largest economy, which is deeply entangled with U.S. and EU supply chains, raises questions of feasibility, said Reuters.

Cross-strait tensions spiked last month after China lashed out against the Biden administration over House Speaker Nancy Pelosi’s controversial visit to Taiwan. Beijing pursued a slew of retaliatory measures in the days following the trip, including canceling bilateral talks with the United States in areas ranging from defense to climate change and announcing targeted sanctions against Nancy Pelosi and her family. The Chinese People’s Liberation Army (PLA) staged a series of unprecedented drills near Taiwan in August that Taipei says were intended to simulate an invasion of the island. China mobilized scores of warships and aircraft to seemingly practice encirclement maneuvers during the exercises and reportedly fired missiles over Taiwan for the first time.

Chinese Foreign Ministry spokesperson Mao Ning said no foreign country has the “right to interfere” in the Taiwan issue when asked about the Reuters report on Wednesday. “Let me stress that no country or individual should underestimate the Chinese government and people’s strong resolve and firm will to safeguard our sovereignty and territorial integrity and to realize national reunification,” she added.