Both the U.S. Navy and Marine Corps Need More Ships 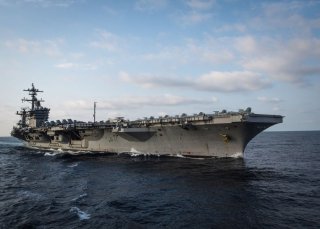 In order to better counter an aggressive China and overcome the Pacific’s tyranny of distance, the U.S. Navy and Marine Corps need many more ships.

“We need twelve carriers,” Gilday said. “We need a strong amphibious force to include nine big-deck (amphibious assault ships) and another nineteen or twenty (landing platform/docks) to support them. Perhaps thirty or more smaller amphibious ships to support Maritime Littoral Regiments … to sixty destroyers and probably fifty frigates, seventy attack submarines and a dozen ballistic missile submarines to about a hundred support ships and probably looking into the future about a hundred fifty unmanned.”

Gilday’s numbers tallied to five hundred and thirteen ships in total, with 263 of those traditional manned combatant ships.

The U.S. Navy sees two challenges: an increasingly capable Chinese naval force that is also rapidly expanding in size, and the vast empty areas that characterize the Pacific Ocean.

“We’re going through another force structure assessment right now, but based on the hard work we’ve done over the last five or six years we’re thinking about how we would fight,” Gilday said.

“How would we fight differently in terms of a wide, vast ocean like the Pacific?” he asked.

The U.S. Marine Corps also needs more ships. As a part of the Corps’ Force 2030 retooling, the Marine Corps is shifting away from the grinding Middle East campaigns that defined the Corps’ service over the past two decades to a leaner, more nimble force at home in the maritime domain.

And to pivot to the Pacific, the Corps needs ships.

During the WEST 2022 conference, Marine Corps commandant Gen. David Berger said the Corps has a ship requirement study in progress that will inform Navy Secretary Carlos Del Toro how many ships the Marines precisely need.

“If it’s anything like the previous studies – we’ve had I think twelve studies in the last thirteen years – every one of them came out [to] about thirty-one [amphibious] ships,” Berger said. “So I don’t know what this one will come to, but I can’t see it radically different from that ... That’s our Marine Corps requirement. That’s maybe different from what the nation can afford.”

One of the most significant assets for the Marine Corps’ shift to the Pacific will be the Light Amphibious Warship. This new design will ferry groups of seventy or so Marines plus supplies and some vehicles throughout the Pacific in a twenty-first-century island-hopping campaign.