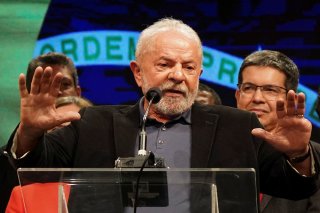 With nearly all electoral districts reporting, Lula received 48.3 percent of the vote, while Bolsonaro trailed with 43.2 percent. Two other minor candidates associated with liberal and centrist parties came in third and fourth. Because no candidate secured an outright majority, Lula and Bolsonaro will face off in a runoff election on October 30, but because most of the voters for the two minor candidates are likely to switch to Lula, the former president is expected to win the rematch. However, the result marks a significant deviation from pre-election polls, which suggested that Lula would win outright, and Brazilian experts have agreed that the election remains competitive and an upset is still possible.

A former union organizer turned politician, Lula served as a legislator in Brazil’s Chamber of Deputies and as chairman of the left-wing Workers’ Party (PT) prior to his election. As president, he enacted a series of sweeping welfare programs, including the Bolsa Familia program providing conditional cash transfers to poor Brazilians. The program, which covered roughly one-fourth of the country’s population until its cancellation by Bolsonaro in 2021, was credited with significantly decreasing poverty in Brazil, and its success led to astronomical support for Lula during his presidency. Although the former president’s reputation was tarnished by a corruption scandal after he left office—resulting in his imprisonment from 2018 to 2019—his conviction was later nullified and he remains the country’s most popular politician. On the campaign trail, the former president has pledged to reduce income inequality and expand welfare services to the poor. By contrast, Bolsonaro has pledged to drive economic growth through environmental deregulation, and has prioritized hot-button cultural issues, including loosening Brazil’s gun laws and continuing his fight against what he has characterized as Western-imported “gender ideology.”

In the run-up to the election, Bolsonaro suggested that he would not accept the result if he lost, and some of his supporters have spread conspiracy theories regarding the neutrality of Brazilian voting machines—echoing similar false claims made by President Donald Trump and his supporters after he lost to Joe Biden in the 2020 United States presidential election.