Britain Loves the German Boxer—and They Are Ordering More 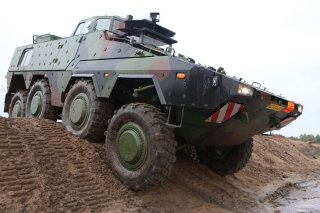 The armored vehicle is one of the best-protected 8x8 platforms in existence.

In a statement, Rheinmetall, the German defense industry heavyweight behind the Boxer design, explained that the British government and a German consortium “have signed a contract extension to supply the British Army with an additional 100 Boxer wheeled armoured vehicles.”

The company added that the contract includes “three previously ordered variants of the Boxer: the infantry carrier, the command vehicle and the field ambulance.”

The German firm explained, “in issuing the order, the United Kingdom is exercising an option contained in the contract signed in 2019 for the Mechanised Infantry Vehicle (MIV) procurement project, which includes 523 Boxer wheeled armoured vehicles in several variants.”

Furthermore, “ARTEC will be supplying the vehicles to the UK via OCCAR, the intergovernmental Organisation for Joint Armament Cooperation,” Rheinmetall explained, emphasizing the platform’s Britishness.

“The bulk of Boxer production will take place in Britain. Series production is currently getting underway in Germany, after which most of the Boxer vehicles already ordered will be produced in British factories of Rheinmetall BAE Systems Land and KMW subsidiary WFEL.”

The German Boxer design is relatively new, and the platform entered service first with the Bundeswehr in 2011. A key aspect of the Boxer is the vehicle’s modular design, which allows for specific configurations for various missions.

The Boxer can be outfitted with a heavy or medium remote weapon station or a 30mm main gun, depending on the anticipated role.

Rheinmetall previously announced that they have a short-range air defense solution for the Bundeswehr. As a part of that proposal, the Skyranger configuration would mate a turreted 35mm main gun to the Boxer’s hull. In addition, it is paired with electro-optical systems and radar that could identify and track a variety of aerial targets.

Compared to similar 8x8 designs, the Boxer has a great deal of internal space, which is particularly useful in the Boxer’s ambulance configuration. Rheinmetall explains that around 1,500 Boxers in several different variants have been built for the German military and customers abroad. The vehicle is also in service with the Netherlands, the United Kingdom, Australia, and Lithuania.

German manufacturing is lauded as some of the world’s best, and the Boxer is an excellent example of why. Not only is the 8x8 fast and can pack a heavy punch, but it is also very well protected and offers commanders a great deal of mission flexibility. And as evidenced by the Boxer’s wide export, a number of other countries agree as well.