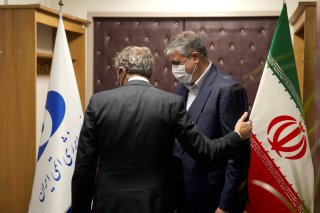 Despite the lack of progress in the latest round of Vienna talks aimed at reviving the 2015 Joint Comprehensive Plan of Action (JCPOA) and rolling back Iran’s nuclear advances, some experts still believe that diplomacy alone can deter Iran. Other voices say that such negotiation efforts won’t work unless they are backed by other instruments, including a credible threat of force and, if necessary, its actual deployment.

Yet diplomacy and the use of force are not necessarily mutually exclusive. Washington has other tools at its disposal that it can combine when engaging Iran.

The Binary Excesses of “War or Diplomacy”

The Biden administration’s policy toward Iran is so focused on diplomacy that it does not consider going beyond that path. Yet while the administration stubbornly insists on this approach, Tehran has increased its efforts to bring the Islamic Republic closer to the nuclear threshold. It continues to operate advanced centrifuges, produce uranium metal, and enrich uranium to 20 and 60 percent purity. If unchallenged, these measures will provide Iran with the irreversible knowledge necessary to produce atomic weapons.

Why has Washington been so cautious about this matter? The answer is the administration’s fear of a political backlash. One only needs to observe the domestic and foreign fallout from the invasions of Afghanistan and Iraq to understand why American politicians have opted to err on the side of caution when it comes to Iran, especially since the stakes are markedly higher.

However, when dealing with foreign policy issues, policymakers have several tools available to them. These go beyond diplomacy to also include economic incentives, sanctions, multilateral security mechanisms and, as a last resort, military power and the use of force. Contending with the Iranian challenge requires a holistic and diverse response that cannot be limited to diplomacy alone.

Invoking the use of military force in contemporary U.S. foreign policy is, of course, somewhat controversial. The use of American military might in reaction to the September 11 terrorist attacks, most evidently embodied in the invasions of Afghanistan and Iraq, has left scars on Washington’s foreign policy discourse. Vociferous criticism of President George W. Bush for the excessive use of force during his first term compelled him to reduce the scale of military engagements during his second term.

Yet the real shift came in 2009, when President Barack Obama decided to effectively abandon American hard power and exclusively embrace soft power instruments and diplomatic engagement. These well-meaning but insufficient policies resulted in the JCPOA, better known as the Iran nuclear deal. The JCPOA, though nominally successful, has nonetheless allowed Iran to largely maintain its enrichment capability and advance its nuclear program in a different form. Additionally, the deal granted Iran a significant amount of economic relief. While this may have been good for the country’s population, it also meant that the government had access to additional funds. As a result, Iran’s Revolutionary Guard Corps (IRGC) and Hezbollah have benefited, allowing Tehran to expand its sphere of influence through IRGC-led proxy groups that have spread mayhem, sectarianism, and terrorism in the region.

President Donald Trump’s term in office saw a dramatic shift in the United States’ approach to Iran. Instead of treating diplomacy and the use of force as mutually exclusive options, Trump entertained utilizing other foreign policy tools. Most notably, the Trump administration implemented a maximum economic pressure campaign, designated the IRGC as a foreign terrorist organization, and ordered a drone strike on Qasem Soleimani, the head of the Quds Force, the IRGC’s expeditionary branch.

Under President Joe Biden, Washington has once again shifted. The Obama-era’s heavy reliance on diplomacy alone has been reintroduced. But despite this reversal, no progress is being achieved. In light of this failure, Biden should consider revisiting the previous administration’s policies and drawing lessons from Trump’s approach.

The assumption that Washington is destined to either engage in endless negotiations or hurl itself into an endless, all-out war with Tehran is absurd. There are a number of foreign policy tools that the Biden administration can and should utilize.

Contrary to how it may appear, conducting surgical or limited strikes against Iran may be necessary to both stop Iran from obtaining a nuclear weapon and prevent a full-blown war. Though some may believe that surgical strikes would escalate tensions and increase the likelihood of war, the opposite is also possible: strikes can serve as a means to keep Iran in check and send a clear and unmistakable message that diplomacy is a preferable option. Consider President Obama’s decision to not enforce his own “red line” on Syria’s use of chemical weapons. Obama’s failure to follow up on his own statement that the use of chemical weapons would be met with force made the United States appear weak and incapable. As a result, the Syrian regime increased its chemical attacks against civilians and got away with it.

During President Trump’s term in office, the United States proved that surgical strikes against Iran can achieve their objectives. The bold decision to eliminate Qasem Soleimani in response to an Iranian proxy group’s attack on the U.S. Embassy in Baghdad paid off. Though furious, the move deterred Iran from launching further attacks on Americans.

Preventing Iran from plausibly denying its involvement in acts of terrorism and targeting senior IRGC commanders can dramatically diminish the country’s activities as a state sponsor of terrorism. As Iranian-led forces have recently stepped up their drone attacks in an effort to push America out of Iraq and Syria, the Biden administration should hold the IRGC responsible and use surgical strikes to keep these groups in check.

Economic sanctions are an important source of American power. In the case of Iran, they accomplish two important goals. First, tougher sanctions mean the Iranian regime is left with less money to fund its proxy groups and foreign activities, thereby promoting regional security. Second, sanctions weaken the Iranian regime economically, leading to popular discontent. This can compel Tehran to return to the negotiating table to seek economic relief.

Many Iranians desire change and a greater measure of political freedom than what they currently have. The theocratic government in Iran is, more than anything else, vulnerable to the causes of freedom, human rights, and democracy. Supporting human rights, pro-democracy forces, and the rights of non-Persian ethnic groups in Iran is the single most important tool that America has yet to utilize.

Most non-Persian ethnic groups in Iran oppose the current regime in Tehran due to its overwhelmingly ethnic Persian composition and its repression of Azerbaijani Turks, Turkmen, Qashqai Turks, Kurds, Ahwazi Arabs, the Sunni Baluch, and others.

Supporting the struggle of Iran’s Azerbaijanis and other ethnic groups makes perfect sense as it puts human rights pressure on the regime, holds it to its own public standards, and is consistent with U.S. foreign policy priorities. Supporting Iran’s non-Persian ethnic groups is necessary for the same reasons that the United States supports the struggle of ethnic Uighurs in China.

A Matter of Time

With Iran getting closer to becoming a nuclear threshold state, the United States needs to deploy all available instruments. For obvious reasons, all-out war is unthinkable. However, because time is on the side of the Islamic Republic, there are serious doubts that diplomacy alone will work.

The United States must effectively blend its existing tools and develop novel ones to delay and block Iran’s march toward acquiring nuclear weapons.