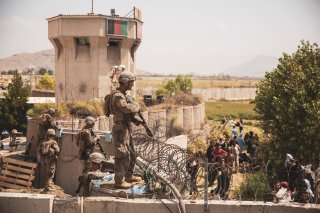 Chinese Foreign Ministry spokesman Wang Wenbin claimed on Monday that the fall of the U.S.-backed government of Afghanistan one year ago—and the subsequent haphazard U.S. evacuation from Kabul’s airport, which concluded with the departure of the final U.S. soldier on August 31—represented an era-defining failure for American hegemony and its foreign democracy promotion project, but insisted that policymakers in Washington had not learned from it.

When noting the anniversary, Wang claimed that the evacuation from Kabul had become a “byword for the U.S. debacle in Afghanistan,” arguing that it “mark[ed] the failure of the ‘democratic transformation’ imposed by the United States.”

“The path to democracy varies from country to country, and will not work if it is imposed from the outside,” the spokesman said, echoing a common Chinese talking point against U.S. foreign intervention and democracy promotion around the world. “Forcing…U.S.-style democracy on a country has invariably led to dysfunction and failure of its implementation.”

Wang also accused the United States and the international coalition in Afghanistan of abandoning its local allies, including many members of the previous Afghan government and security forces, during the fall of Kabul. Although more than one hundred thousand Afghans were ultimately evacuated from Kabul by U.S. troops during the airlift, many of them were stranded for months at Qatar’s Al-Udeid Air Base, and only around half have since settled in the United States. Hundreds of thousands more were left behind, and many have since faced persecution under the Taliban government.

“The so-called ‘leader of the West’ left its reputation in tatters when it decided to ditch its allies in the hurried retreat,” Wang declared, apparently referring to the United States. The Foreign Ministry spokesman made no mention of U.S. and NATO forces’ evacuation efforts during the Kabul airlift.

“More importantly, the [evacuation] marks the failure of the U.S. strategy of hegemony,” Wang continued, alleging that the United States had been “invading and interfering in countries across the world under the pretext of democracy” for its own ends since the Cold War era. He claimed that the setback in Kabul had not stopped the United States from pursuing further “interferences” around the world, but warned it that it was “acting against the trend of the times” by launching further interventions.