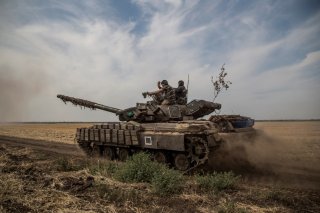 Chinese ambassador to Russia Zhang Hanhui declared on Tuesday that the United States bore the primary responsibility for the ongoing Russian invasion of Ukraine, insisting that U.S. policymakers had sought to expand NATO eastward with the explicit purpose of provoking a conflict with Russia in order to defeat it.

“As the initiator and main instigator of the Ukrainian crisis, Washington, while imposing unprecedented comprehensive sanctions on Russia, continues to supply arms and military equipment to Ukraine,” Zhang claimed in an interview with Russia’s state-run TASS news agency. “Their ultimate goal is to exhaust and crush Russia with a protracted war and the cudgel of sanctions.”

Zhang’s argument—that Russia had no choice but to invade Ukraine in order to protect its own security—closely resembles the Kremlin’s justification for the “special military operation” it launched in February. This justification has been widely criticized in the West, where the invasion is framed as a war of aggression by Russian leader Vladimir Putin intended to erase Ukraine’s independence.

Now in its sixth month, Russia’s military has captured a significant area in eastern and southern Ukraine, including nearly all of the contested “Donbass” region, where two pro-Russian separatist territories in the cities of Donetsk and Luhansk have conducted a low-level war against the government in Kyiv since 2014. However, Russia has struggled to make further progress inland, particularly since the arrival and deployment of the American “High Mobility Artillery Rocket System,” or HIMARS, in June and July.

Zhang also covered other topics in the interview, including Speaker of the House Nancy Pelosi’s recent visit to Taiwan—a visit that he condemned as an attempt to “revive a Cold War mentality, contain China and Russia, and provoke major power rivalry and confrontation.”

“Non-intervention in [other countries’] internal affairs is the most fundamental principle of maintaining peace and stability in our world,” the Chinese ambassador said, insisting that the dispute between mainland China and Taiwan—which Beijing claims as a rebellious province—amounted to an internal matter within China, rather than an international dispute.

Zhang also briefly praised the relationship between Moscow and Beijing, which entered its current phase after Putin traveled to Beijing to attend the opening ceremony of the 2022 Winter Olympics. At a pre-Olympic summit, the two leaders declared that the Sino-Russian partnership had “no limits,” and Zhang reaffirmed that commitment, claiming that their bilateral relationship had entered “the best period in history, characterized by the highest level of mutual trust [and] interaction and the greatest strategic importance.”