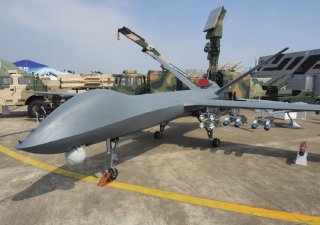 China is now flying a large, long-dwell maritime drone over the Pacific Ocean as part of a transparent effort to increase surveillance in the region and adapt unmanned systems to ocean conditions.

The platform, called the CH-5 drone, recently completed its first flight test, according to a news report in the Chinese-government-backed Global Times. The paper describes the drone as a medium to high altitude drone system engineered to “cope with complicated and dynamic oceanic conditions.” The maritime CH-5 variant, an adaptation of China’s existing armed CH-5 reconnaissance drone, also tested several new radar and payload systems in the demonstration to include electro-optical, infrared sensors and wide-region radars. Interestingly, the standard CH-5 variant is an armed drone with a fully automatic flight control system, jam-proof data chain and all-weather payload, the Global Times story explained.

China’s CH-5 tandem drones present an interesting and a rather close parallel to the U.S. Air Force’s Global Hawk drone and its maritime variant, the U.S. Navy’s now operational Triton. It takes little imagination to see that the shape, size and mission scope of the CH-5 maritime variant appears nearly identical to the U.S. Navy’s Triton drone, raising a question as to whether some measure of espionage played a part in its construction. It is arriving just several years after the Triton and China of course has a known and well-documented history of conducting cyber espionage against the United States.

The Global Hawk, which has now been in service many years, is a large, long-dwell Air Force surveillance drone, which has deployed throughout the globe; its companion, the Triton, is a variant specifically engineered for maritime conditions with new sensors, radar and de-icing technology. The Triton is also configured with a new technology enabling it to quickly change altitude in varying weather conditions.

The U.S. Navy now operates several Triton drones out of Guam. In terms of performance, quite simply, the Chinese CH-5 sounds quite similar to the Triton, however many details are of course not likely to be available.

Drones built for maritime warfare bring added tactical significance to places like the Pacific region, as forces operating there have to account for or somehow overcome the vast geographical expanse of the area often referred to as the “Tyranny of Distance.”

The Triton can cover broad areas out on the ocean in a single mission. The idea is to provide ship commanders with an ability to detect and see targets, threats and items of interest in real-time from great distances using the sensors, cameras and data-links of the Triton system.

The Triton is an autonomous air vehicle able to chart a course without needing to be remotely piloted. Computer algorithms and onboard systems enable the aircraft to account for wind, temperature and altitude conditions. The Triton’s electronics include an electro-optical/infrared sensor, a 360-degree active electronically scanned array radar and inverse synthetic aperture radar (ISAR), among other things, Navy developers have said. The sensors create a common operational maritime picture including images, data and full-motion video. An electronic support measure is also able to detect maritime signals.

Synthetic Aperture Radar, or SAR, sends an electromagnetic signal forward and then analyzes the return signal to paint a picture or “rendering” of the terrain below. SAR is primarily used for land missions, whereas ISAR is specially engineered to zero in on targets in a maritime environment. The Triton is built with a thicker, more stiffened wing compared to the Global Hawk to enable the aircraft to rapidly change altitude in adverse or icy weather conditions, he added. The Navy also separately tested the Triton’s software and sensor systems by flying them in a surrogate Gulfstream 2 airplane.

The Triton is designed to bring endurance, altitude, range and persistent stare ability over a wide, expansive area; it can stay on missions for over twenty-four hours at altitudes greater than fifty thousand feet, Navy developers explained.