China's Special Forces Units Are Getting Ready for War 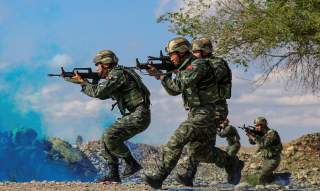 The Chinese People’s Liberation Army has completed a massive series of exercises for it special operations forces (SOF) in the city of Guilin in China’s Guangxi Province.

The exercises, which are called Ingenious Special Operations Soldier-2018, are the Chinese People’s Liberation Army (PLA) ground forces’ first ever such assessment of their special operations capability.

“The assessment and contest covered all basic and compulsory training subjects of the special operations of the PLA Army,” PLA Army officer in charge of the exercise told ChinaMil—an “authorized by the Central Military Commission of the People's Republic of China (PRC) and sponsored by the Chinese People's Liberation Army (PLA) News Media Center.”

According to the China Mil posting: “During the 9-day assessment and contest, 870 SOF officers and soldiers from the PLA Army were divided into 4 categories of commanding HQ, detachment commanders, SOF teams, and SOF individuals and took part in the fierce competitions of 64 subjects, including interpretation of remote sensing image, multiple weapons shooting, and consecutive special operations.”

“According to publicly available PLA doctrine, many U.S. SOF Core Activities are not included among PLA SOF missions.”

One of the reasons for that is because Chinese PLA and People’s Armed Police (PAP) SOF units evolved from reconnaissance units.

“The PLA and PAP formed their first special operation unit quietly in the late 1980s and gradually expanded the force through the 1990s and into the new century. SOF units are considered ‘new type’ units receiving priority for development on par with development of helicopter, light mechanized, and ‘digitalized’ units.”

Because of their origins as reconnaissance forces, Chinese SOF tends to focus on direct action missions and Chinese media focuses on the soldiers’ physical toughness rather than technical expertise.

“As a result, Chinese SOF units have demonstrated their capabilities in many types of small unit commando-type direct action and reconnaissance missions, the first two Title X core SOF activities.”

However, Chinese SOF falls short on typical tasks for U.S. SOF such as unconventional warfare.

“Though most analysts assume Chinese SOF would be used in Taiwan contingency operations (including support to and by ‘Fifth Column’ fighters already on the island), there is little open source evidence that SOF units are organized or trained to conduct Title X unconventional warfare activities,” Blasko writes.

“Likewise, though the PLA provides training for foreigners in its system of schools in China, it does not appear to have recent experience in overseas foreign internal defense activities. No PLA SOF units are known to be organized and tasked similar to U.S. Army Special Forces (“Green Beret”) units. The PLA also does not have units equivalent to U.S. Civil Affairs units.”

The Chinese Army's Sneaky Ploy to Take Over China's Military