China's Xian H-6K Bomber Might Have a New Weapon to Sink the U.S. Navy 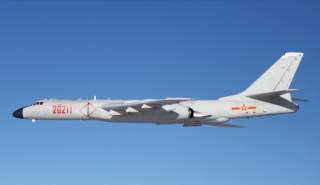 Rumors abound on the Chinese Internet that Beijing has tested a new air launched anti-ship ballistic missile—or potentially some form of other hypersonic weapon—from a Xian H-6K bomber.

There is no confirmation from official Chinese sources that such a test took place. However, if the rumor proves to be true, it would mark a significant increase in Chinese anti-access/area denial capabilities.

“Rumor that China has conducted a test launch of an air-launched anti-ship ballistic missile from a modified H-6K intermediate-range bomber,” Hans Kristensen, director of the Nuclear Information Project at Federation of American Scientists, said in a tweet.

“The anti-ship version would presumably be conventional; another ALBM possible has nuclear option.”

The PLAAF’s strategic bomber force is particularly important for China’s anti-access/area-denial strategy, which is designed to keep U.S. forces out of Western Pacific. And though the Xian H-6K is based on the venerable 1950s-era Tupolev Tu-16 Badger, the modernized jet is still a force to be reckoned with especially when armed with modern long-range cruise and—potentially ballistic—missiles.

While it is unclear if the Chinese have actually tested an anti-ship ballistic missile from a H-6K, it would not be particularly surprising if the rumors proved true. The Chinese have previously developed land-based anti-ship ballistic missiles such as the DF-21D and the DF-26. It is possible that Beijing has adapted one of its smaller, short-range land-based ballistic missiles such as the DF-15 into an air-launched variant similar in concept to how the Russians adapted the 9K720 Iskander into the Kh-47M2 Kinzhal.

While the Kinzhal purportedly has a range of more than 2,000 km (1,200 mi) when launched from a Mikoyan MiG-31K Foxhound flying at high altitude and high speeds, the original ground-launched Iskander had a range of 500km. The missile would also achieve extended ranges when launched from a supersonic Mach 1.88-capable Tupolev Tu-22M3M Backfire bomber, but the weapons likely does not attain the same range as it does from the Mach 2.83 capable Foxhound. Nonetheless, launching the weapon from the air does increase its range in either case.

In the Chinese case, assuming that Beijing’s air launched ballistic missile was based on the 600km range DF-15; it would likely gain a significant boost in range even when launched from the subsonic H-6K. The main drawback of using the DF-15 as the basis of an air launched ballistic missile is the weapon’s huge size and weight—it is nearly 30ft long and weighs more about 13,700lbs. The H-6K can carry that much payload easily, but the weapon would likely need to be mounted on a specially modified hardpoint. The H-6K might also require airframe modifications to handle increased stresses.

However, the requisite modifications are probably comparatively minor compared to the overhaul the current version of the H-6 has already received—which should allow it to carry a hefty payload to significant distances. The new H-6K variant replaces the old Xian WP8 turbojets found on pervious H-6 versions with new Russian Soloviev D-30-KP2 turbofans. The D-30 low bypass two shaft turbofan—which some might call a leaky turbojet—has been modified for use on a number of applications ranging from the Mach 2.83 capable Mikoyan MiG-31 Foxhound interceptor to the Ilyushin Il-76 military transport to the Il-62 airliner to the new Xian Y-20 strategic airlifter. While the D-30—having been originally designed to power the MiG-31—is not an ideal engine for a subsonic bomber or transport aircraft, it is an enormous improvement over the primitive WP8 turbojets that were originally installed on the H-6.

The CJ-10K land-attack cruise missile has a range of over 930 nautical miles and carries a 1,100-pound warhead. The weapon—which draws heavily from the Soviet-designed Raduga Kh-55 cruise missile that China acquired from Ukraine—has many of the advanced features found on the American Tomahawk and the Russian Kalibr. Indeed, the CJ-10K guidance package is thought to include combination of inertial navigation system, satellite navigation, terrain contour matching and digital scene-mapping area correlation.

If the rumors of the Chinese H-6K launched aeroballistic missile prove to be true, the Chinese bomber fleet is simply adding another arrow to its quiver. A long-range strike that combines a simultaneous cruise and ballistic missile attack would complicate a defenders problem in intercepting the incoming weapons. As such, if the Chinese have developed an air-launched ballistic missile that can be launched from a H-6K, the weapon could significantly bolster China’s A2/AD capabilities.