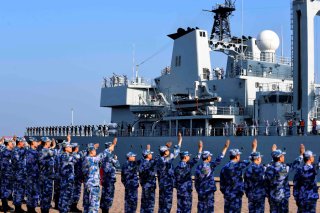 The Chinese Navy is accelerating its naval modernization efforts with the addition of a new “utility landing craft” capable of transporting armed vehicles, troops, and supplies to support amphibious attacks.

The drills with the new craft, according to the Chinese government-backed Global Times newspaper, “put the small landing craft's realistic scenario combat capabilities to test by practicing multiple courses over a long distance and time.” The Global Times added that “this enhanced the force's ability to win battles.”

It is difficult to determine how realistic a Chinese amphibious assault on Taiwan would be. However, the United States and its allies are certainly paying attention to China’s intensified rhetoric about unification with Taiwan and the growing number of exercises, warship transits, and fighter jet incursions near the island.