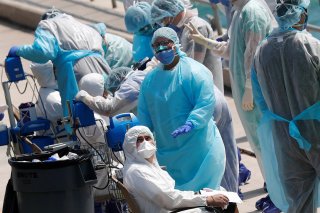 As was predicted, the number of Americans now out of work because of the coronavirus-related business shutdowns is astronomical.

In the week between March 14 and March 21, 3.28 million people filed for unemployment benefits. This is the highest number of applicants in one week since the Department of Labor began collecting data in 1967, beating the previous record set during the 1981-82 recession which topped off at 700,000. This situation is the polar opposite of two weeks earlier, when the unemployment number was 211,000, a fifty-year low.

The largest increases were reported in the northeast of the country. Pennsylvania, with an estimated 378,900 applicants, now has the largest number of unemployed in the nation by a wide margin. New York state, which is the location of the worse coronavirus outbreak in the country, quadrupled its unemployment rate, totaling over 80,000.

The worst sectors of the economy hit were in the service industry, where people who work at restaurants, retail stores, or places of leisure were the most affected by the mandatory business closures. The service sector is the largest part of the modern U.S. economy.

3.28 million falls in the middle of the expected range; some estimates went as high as five million. The number of unemployed is expected to increase at the beginning of April. In an effort to ameliorate the situation, Congress is in the middle of passing a $2 trillion stimulus package which includes a $250 billion expansion of unemployment insurance.

This intervention, along with the numbers avoiding the absolute worst-case scenario, is why the markets are responding surprisingly well to the announcement. The S&P is up 4%, while the Dow Jones is up even higher. This is the third consecutive day the stock market has risen, all in the expectation of industry-wide bailouts provided by the federal government. Stocks for both airlines and cruise lines rapidly accelerated. Prices for long-term Treasury bonds went up, however, signaling that market watchers are still wary about any kind of short-term investing. The price of oil has continued to decline as well.

Jerome Powell, Chairman of the Federal Reserve, said that the United States “may well” already be in a recession. “The first order of business will be to get the spread of the virus under control, and then to resume economic activity,” Powell said on the Today show this morning. “The virus is going to dictate the timetable here.”

“It’s now about understanding what the economy is going to look like on the other side,” said chief economist at Grant Thornton, Diane Swonk, to CNBC. “The bottom line is it’s going to be different. We had a new normal, and now we have a new normal. The reality is pandemics are real.”