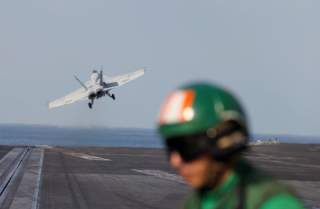 Key Point: Given the apparent difficulty of ensuring that submarines never enter torpedo-attack range, it made sense for the Navy to pursue a short-range “hard-kill” defense system designed to blast approaching torpedoes out of the water.

Image: An EA-18E Super Hornet is catapulted off from the flight deck of the aircraft carrier USS Abraham Lincoln (CVN 72) in the Gulf, November 23, 2019. REUTERS/Hamad I Mohammed