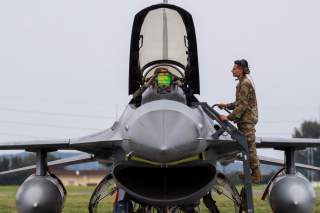 Key point: The F-16 is a great combat system, but it is not infallible.

The F-16 fighter was originally conceived as a lightweight fighter for the United States and her NATO allies. In the U.S. Air Force, the “Fighting Falcon” would comprise the low end of a “high-low” mix of super-capable F-15s and cheaper, less capable F-16s. Among NATO allies, it would be a frontline fighter to replace aging planes like the F-104 and F-15.

A confluence of events—including a series of budget-draining wars in the Middle East for which the F-16 has been “good enough” and delays in the F-35 Joint Strike Fighter program—have conspired to keep the F-16 flying much longer than originally intended. Why the F-16 is still in service is fodder for another article, but the bottom line is that it is serving today and is seriously outmatched by a new generation of Russian and Chinese fighters.

First, let’s look at one of the most recent and popular versions of the F-16, the Block 50 variant. Block 50 features a AN/APG-68 V(5) radar, F100-PW-229 afterburning turbofan engine, and the AN/ALE-47 threat adaptive countermeasure system. The Block 50 has a maximum sustained speed of Mach 1.89, a range of 360 miles on internal fuel, and a ceiling described as “above 50,000 feet.” It can carry up to six AIM-9 Sidewinder short-range infrared homing missiles or six AIM-120 AMRAAM beyond-visual-range missiles, or some combination of either.

Despite the F-16’s longevity, obsolescence was inevitable. The F-16 will not fare well against a powerful new generation of Russian and Chinese fighters. The Moscow’s Su-35 Flanker and PAK-FA fighter and the Beijing’s J-20 stealth fighter, all previously described here, have rendered the Fighting Falcon obsolete.

Although based on an contemporary of the F-16, the original Su-27 Flanker, the Su-35 has been more thoroughly updated than the spunky American fighter. The Su-35 may not be stealthy, but it can detect and engage the F-16 before the F-16 can detect it, and this puts the American plane at a big disadvantage. In a one-on-one fight, the F-16 will probably not even be able to get the Su-35 into dogfighting range, where the smaller fighter’s legendary maneuverability would come into play.

The new Russian PAK-FA and Chinese J-20 fighters will have similar advantages, except their stealthy design will ultimately mean F-16s won’t even detect their adversaries before they realize they are being targeted by beyond-visual-range guided missiles, launched by aircraft that only visible on radar for the brief moment their internal weapons bay doors are open.

What could be done to give the F-16 better odds? The latest variant of the Fighting Falcon, the F-16V, will have the APG-83 Scalable Agile Beam Radar (SABR) radar, the first AESA radar retrofitted into the platform. SABR has been described as “fifth-generation fighter technology,” and indeed promises earlier detection, tracking and identification of targets sooner than older radars. The Republic of China Air Force’s F-16s will be the first to be brought up to -V standard. The U.S. Air Force is pondering a service life extension program (SLEP) for select aircraft in the F-16C fleet, and the SABR radar is an obvious candidate for inclusion.

Yet improving the F-16’s detection ability is only half the problem. While stealth has its disadvantages and countermeasures are inevitable, it’s also true that, like radar and electronic countermeasures, stealth is now permanently part of the essential feature set of modern combat aircraft. While China and Russia tout new anti-stealth measures, they are also making certain their own new aircraft are as stealthy as possible. That both countries, struggling to catch up with the United States, are still willing spend on stealth is a ringing endorsement of its value.

While SABR will likely improve the F-16’s ability to detect fifth-generation fighters such as PAK-FA and the J-20, it will still be easy for enemy aircraft to detect. The F-16’s lack of stealth is not something that can be addressed with upgrades to the airframe or an electronics package. The only solution is a new aircraft.

The F-16 still has a great deal of value against smaller, less technologically advanced air forces and air defenses, as well as low- to mid-intensity conflicts such as Libya and Syria. It’s also useful as a bomb truck, carrying long-range munitions such as the JASSM cruise missile behind a protective wall of F-22 and F-35 fighters. But thanks to PAK-FA and the J-20, its days as a day-one frontline fighter are over. As the F-35 enters service with the United States and with its NATO and Asian allies, the F-16 begins its long, well-earned flight into the sunset.

Kyle Mizokami is a defense and national security writer based in San Francisco who has appeared in the Diplomat, Foreign Policy, War is Boring and the Daily Beast. In 2009 he cofounded the defense and security blog Japan Security Watch. You can follow him on Twitter: @KyleMizokami. This first appeared in September 2016.