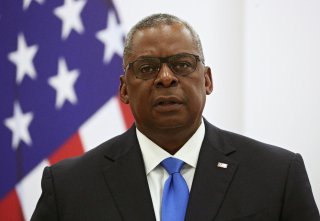 Defense Secretary Lloyd Austin on Sunday declined to directly endorse President Joe Biden’s stance that the U.S. military would defend Taiwan in the event of a Chinese attack, according to a new Politico report.

“In accordance with the Taiwan Relations Act, we’re committed to helping Taiwan develop the capability to defend itself,” he said in an interview on CNN’s Fareed Zakaria GPS. “And that work has gone on over time and will continue into the future.”

In an interview last month on CBS News’ 60 Minutes, Biden was asked if the U.S. military would directly take part in defending the island nation.

“Yes, if in fact there was an unprecedented attack,” Biden replied, adding that “U.S. men and women” would be involved in such an effort.

“We agree with what we signed onto a long time ago,” he continued. “And that there's One China policy, and Taiwan makes their own judgments about their independence. We are not moving—we're not encouraging their being independent. We're not— that—that's their decision.”

The One China policy dictates that the United States recognizes the government in Beijing while allowing for informal relations and defense ties with Taipei. China regularly and vehemently defends its claim to Taiwan, which separated from the mainland after a 1949 civil war and now functions with its own government. Beijing claims the island nation as its own territory and has not ruled out retaking the island by force if necessary.

“I think the president was clear in providing his answers as he responded to a hypothetical question. But, again, we continue to work to make sure that we have the right capabilities in the right places to ensure that we help our allies maintain a free and open Indo-Pacific,” Austin said.

“The American military is always prepared to protect our interests, and live up to our commitments. … We don’t want to see a unilateral change to the status quo,” he continued.

Last month, the State Department also signed off on a $1.1 billion arms sale to Taiwan. Chinese embassy spokesperson Liu Pengyu responded in a series of tweets, claiming that the arms deal “sends wrong signals to ‘Taiwan independence’ separatist forces, and severely jeopardizes China-US relations and peace and stability across the Taiwan Strait. China is firmly opposed to this.”