Does the Moskva’s Sinking Herald the Death of Surface Combatants? 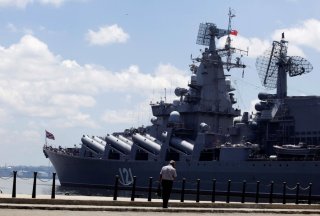 On April 15, 2022, Russian defense authorities announced that the Moskva, a guided-missile cruiser, had sunk while under tow following an onboard blaze caused by an ammunition fire. Before the first official announcements from Moscow, Ukraine claimed to have hit the ship with a pair of locally-developed, shore-based Neptune anti-ship missiles, a claim that was corroborated by U.S. officials. The Russian Navy armada off Ukraine’s coast was observed pulling back farther south, a potential sign of concerns about the threat posed by Ukraine’s missiles.

If the cause of the Russian cruiser’s demise was indeed a successful Ukrainian missile strike, the Moskva would be the largest surface combatant sunk by an enemy since the sinking of Argentina’s General Belgrano by a British submarine in 1982.

Whatever the cause, the loss of the cruiser will deal a significant blow to the ongoing Russian military campaign in Ukraine. Already plagued by significant manpower and materiel losses on land, the Russian invasion of Ukraine has dragged on much longer than the Kremlin expected. The demise of the Moskva, the flagship of the Black Sea Fleet and Russia’s most capable surface combatant, will have a psychological impact on the already low morale among Russian troops and make an amphibious assault on Odessa less likely.

The full story behind the Moskva debacle is likely to be revealed only after the war is over, if it emerges at all. The conflict has already revived an earlier debate about the merits of the main battle tank against cheaper anti-armor weapons, which has been romanticized by the use of anti-tank systems by Ukraine’s spirited defenders. The loss of the Moskva has caused a naval equivalent of this debate, this time between surface combatants and anti-ship missiles.

On the one hand, the Moskva is a Project-1164 Atlant cruiser that costs up to $700 million to construct and bristles with a primary offensive armament of sixteen P-1000 Bazalt long-range cruise missiles. On the other hand, like typical shore-based anti-ship missile systems, the Neptune is much cheaper. The cost proposition is clearly slanted in favor of missiles against ships. Proponents of the “end of the surface combatant era” will be quick to highlight this point.

Yet it is important to view this in perspective. We have seen this debate since 1967, when the Israeli destroyer Eilat became the first surface combatant to be sunk by an anti-ship missile. Then there was the British experience during the Falklands War. The destroyer Sheffield was sunk while under tow following a successful Argentine strike using an air-launched Exocet missile. The destroyer Glamorgan was hit by an Exocet adapted for shore launch by the Argentines; though it survived, the ship ultimately withdrew for repairs and saw no further combat action thereafter.

During the Iran-Iraq war two decades later, the U.S. Navy frigate Stark was struck by two Iraqi Exocets. The ship was subsequently withdrawn from the Persian Gulf for repairs. Nineteen years later, the Israeli corvette Hanit was struck by a shore-based Hezbollah C-802 anti-ship missile. The warship remained afloat and sailed back to base under its own power for repairs.

Beefing Up the Sword and Shield

The “ship versus missile” debate continues to this day, especially when anti-ship missiles confer weaker belligerents an asymmetric edge against stronger navies. This has driven the proliferation of modern, cheaper, and increasingly more capable anti-ship missiles across the global arms market. Anti-ship missiles can be fielded in vast quantities without nearing the cost of a single destroyer or frigate.

However, this cost disparity has not yet stopped navies from pursuing principal surface combatants. Contemporary warships are larger, more capable, and more expensive to build, operate, and maintain. This qualitative improvement is in no small part designed to compensate for shrinking fleets worldwide. As governments strive to maximize limited tax revenue, successive modern principal surface combatants have served in smaller numbers, even if they are more capable than those they replace.

Even as navies recognize the missile threat, the solution has always been twofold: enhancing the surface combatant’s offensive striking power to allow it to outrange and hit the source of the missile threat, be it an enemy warship or shore-based battery; and strengthening its shipboard air defenses (“hard kill”) and electronic warfare (“soft kill”) capabilities. A combination of these measures would be ideal to handle the evolving missile threat.

In 1973, the Battle of Latakia showed how anti-ship missiles and anti-missile defenses can work in concert. In its “knife fight” with the Syrians, Israel’s fast attack craft successfully tackled the Styx missiles using “soft kill” defenses and managed to sink several of their opponents with the Gabriel anti-ship missile.

More recently, off the coast of Yemen in 2016, the American destroyer Mason successfully defended against Houthi shore-based anti-ship missile attacks with its air defenses. After the second unsuccessful rebel attempt to target the Mason, sister ship Nitze managed to pulverize the Houthi coastal radar sites involved in the attacks with a cruise missile strike the following day.

This ship versus missile debate will continue, and the appetite for both anti-ship missiles and surface combatants will persist as well. The Moskva incident is unlikely to herald a conclusion to this debate. Instead, the loss of the cruiser will merely become the newest addition to the history of this debate.

Smaller navies that do not enjoy similarly lavish funding will still seek to capitalize on the accessible anti-ship missile market by adapting these weapons for smaller numbers of surface combatants and shore-based batteries. There is no doubt that surface combatants will continue to serve multiple functions as instruments of a country’s defense and foreign policy.

The ship and the missile should not be seen as mutually exclusive. Rather, they constitute an integrated system of naval instruments that fulfills a range of national defense needs. The Moskva’s sinking notwithstanding, it would be prudent for navies to invest in both capabilities.

Collin Koh is a research fellow at the S. Rajaratnam School of International Studies, based in Nanyang Technological University, Singapore.