Feed the Beast: How the Marines Plan to Sustain Open-Ended Pacific War 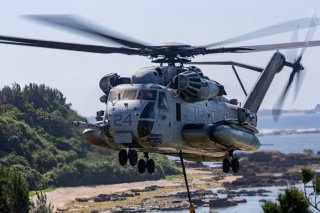 In preparation for a fight in the Pacific, the U.S. Marine Corps is refining its logistical capabilities to keep forces stationed in remote parts of the Pacific supplied with everything they need to win.

A recent Marine Corps exercise, called Maltese Dragon, was a new kind of maneuver that focused on logistics rather than warfighting.

“Maltese Dragon is about how the MLSG – OKI command and control can facilitate sustainment, leveraging the operationalization of the installations on Okinawa to support those forces deployed forward in the first island chain,” Lt. Col. Justin Hooker, commanding officer, 3rd Landing Support Battalion, said in a statement on the exercise.

“Dispersing these folks all across these island chains, it’s going to make a logistician’s job very difficult,” said Lt. Col. Karl Eisenmann, exercise officer, MCLOG, Marine Air Ground Task Force Training Command. “We have to change our mindset and figure out how to operate differently in order to be successful.”

“During the exercise, Marines focused on merging installations and tactical logistics capabilities in the Pacific,” the press release stated.

“The exercise is taking a look at making sure we have the logistics and installations arrangements aligned as efficiently as possible,” said Col. David Banning, commanding officer, Headquarters and Services Battalion, Marine Corps Installations Pacific.

The Marine Corps is currently in the middle of some of the most significant institutional changes since World War II. Gone are the days of acting as a second army and fighting grinding counterinsurgency campaigns in the Middle East. Instead, the Corps is gearing up for a fight that would see them in the Pacific’s littorals hunting down Chinese vessels and, in some cases, tracking and sinking Chinese submarines.

The statement recalled that “Gen. David Berger, Commandant of the Marine Corps, states in his planning guidance, ‘Logistics capabilities must be organized to enable and sustain the Stand-in Force while retaining appropriate capacities to support global crises and contingencies. The mechanisms we employ to sustain stand-in forces must remain applicable for competition, crisis, and conflict.’”

The Marine Corps’ effectiveness in the Pacific will hinge on keeping its forces supplied with bullets, beans, and bandages. If America’s force-in-readiness has what it needs to win, it will be prepared to face the Chinese threat in the Pacific theater.