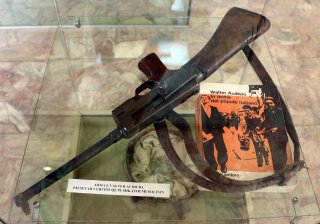 At the beginning of the Second World War, bolt action rifles were still the main weapon for most infantrymen, but the armies of Europe—as well as the United States—had seen the potential for a new class of weapon: the submachine gun.

Many of those weapons have become iconic and tied to the respective nation that used them—the German MP-40, the Soviet PPSh-41, the British Sten Gun and the American Thompson. However, France's PistoletMitrailleur MAS model 38, or MAS-38, was largely forgotten.

Of course, one factor is that France was defeated in May of 1940 and the Free French forces that helped liberate North Africa and Europe from the Nazis used British and later American equipment and small arms. In addition, less than two thousand were produced—but another factor is that the weapon was really designed for a replay of World War I and was essentially out of date by the time World War II arrived only a year later.

France went into the World War I with its Lebel and Berthier rifles, which were among the longest main battle rifles of the conflict. The length proved problematic in the trenches, as did the slow rate of fire—so France sought to develop newer automatic weapons such as the Chauchat, a weapon that was innovative but not without problems.

With war on the horizon, the French military undertook a number of efforts that likely seemed the correct move at the time. This included building the Maginot Line and developing new small arms that would give an edge in the trenches. These included a short battle rifle, the MAS-36 and then a new submachine gun, the MAS-38.

It was developed from a series of experimental French submachine guns, including the STA/MAS M1924, which was loosely based on the German's MP18—the first widely employed submachine gun that had been introduced in the final year of the World War I. The M1924 even fired the same 9x19-millimeter Parabellum pistol ammunition as the German weapon.

As was common with France during the Third Republic, the Ministry of War was plagued by infighting and many within it said there was no need for a submachine gun—so even as a new weapon was developed, production didn't begin until just prior to the outbreak of the war in 1939.

The MAS-38 was truly a compact weapon even with a fixed wooden rifle-type stock, and it was clearly meant to be used in the close confines of a trench or in defense of the fortresses that made up the Maginot Line on the German frontier. It was just twenty-four-inches long, with a barrel that was a scant 8.7 inches in length. The compact submachine gun had a narrow receiver and weighed just 6.5 pounds.

It had a simple blowback action and could fire only on full-auto from an open bolt. It had an unusual design in that the barrel and bolt travel were not parallel—while the bolt handle stayed non-reciprocating and stayed in the rearward position once the gun was charged. Even with its lightweight, the mild recoil reportedly made it easy to control. It was also machined from solid steel and had only a few stamped parts, which resulted in a high production cost.

The weapon was chambered for the 7.65mm Longue cartridge, which was also used in the newly introduced Model 1935A sidearm that was developed for the French Army. The choice of ammunition meant while the gun could use the new standardization French rounds, soldiers would be unable to use the German 9mm ammunition when captured. Moreover, it didn't have the stopping power of the German ammunition.

The weapon proved itself to be reliable even if a bit complex. It was deemed accurate for the role, as it was issued to NCOs and officers. However, it had only entered large-scale production when Germany captured the MAS factory in 1940. The Germans continued to produce a small number for its military as the MP722(f), and also allowed it to be used by pro-German Vichy French forces.

Interestingly, some were captured by Italian partisans near the end of World War II and it was a MAS-38 that was used to execute Italian dictator Benito Mussolini in Milan in April 1945.