The Forgotten Reasons the F-35 Stealth Fighter Dominates Everything 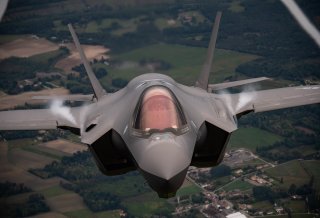 From its deep strike capabilities to class-leading avionics, the F-35’s defining features have been thoroughly discussed in recent years. Less well-known, but no less important, are its forward-looking design concept and remarkable upgradeability. Here is Lockheed Martin’s plan to ensure that its fifth-generation stealth fighter retains its technical edge for decades to come.

The F-35 Lightning II is among the world’s most sophisticated airpower platforms, packed with the latest weapons systems, targeting technology, radar and information processing suite, stealth performance features, and electronic warfare tools. But aerospace engineering is an immensely complex and rapidly evolving field. With the great military powers of the world constantly vying for even the smallest tactical advantage on the battlefield, features that can ensure air supremacy today may very become outdated by the turn of the decade. Both Russia and China are relentlessly investing in next-generation projects that promise a massive capabilities leap over their current aircraft and can pose newfound threats to US assets around the world.

In the face of mounting long-term challenges from America’s major adversaries, Lockheed Martin envisions the F-35--which is slated to serve through 2070--as an adaptable platform that can straddle the line between fifth and sixth-generation fighter technology. “It’s a compliment to the F-35 that many countries are looking to replicate fifth-gen and then extending that to sixth-gen,” Michele Evans, Lockheed head of aeronautics, told Defense News at the 2019 Paris Air Show. I think it really does reflect on the value of what F-35 is bringing to the pilots and the battlespace. In terms of technology, we’re not going to let F-35 go static.”

Lockheed’s immediate plans for the F-35 center around the Block 4 revision, which will arrive starting with the Lot 15 production batch in 2023. Block 4 will bring “Tech Refresh 3,” a sweeping upgrade package that seeks to implement numerous software and hardware changes. These include superior core processor and memory performance, tied into a new Panoramic Cockpit Display. The Block 4 revision will likewise bring the new “Sidekick” weapons rack, allowing the fighter to carry as many as six air-to-air missiles while retaining its stealth performance. It will also offer full support for certain foreign partner weapons, including the European Meteor beyond visual range (BVR) air-to-air missile and the U.K. 's SPEAR 3 cruise missile, as well as Norway’s Kongsberg Joint Strike Missile (JSM). The fighter’s electronic warfare and sensor capabilities will receive a new round of fixes, tweaks, and upgrades.

The Block 4 revision provides a solid technical bedrock for the next round of updates, which could be closer than previously believed: the Pentagon is reportedly mulling a “Block 5” update to “kick in around 2028-2030,” though specifics remain elusive.

Far from merely being fancy bells and whistles, these ongoing, multi-decade upgrades translate into real battlefield capabilities. Consider, for instance, a recent string of wargames that found Block 4 F-35’s, with their enhanced radars, avionics, and weapons, to be crucial in thwarting a prospective Chinese invasion of Taiwan.

The F-35 is a core pillar of US airpower today. Lockheed’s steady stream of upgrades ensure that it will be equipped to fight and win the battles of tomorrow.