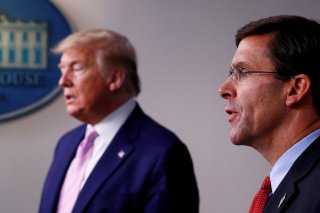 Former Secretary of Defense Mark Esper has alleged in a lawsuit that material in his upcoming autobiography was being inappropriately blocked from public release by the Defense Department, impeding his ability to publish an “unvarnished and candid” recollection of events at the end of the Trump administration.

The book, titled A Sacred Oath, is Esper’s commentary on his service in the White House from 2017 until late 2020. After serving as Secretary of the Army from 2017 to 2019, Esper was tapped to succeed James Mattis as Secretary of Defense after his resignation. He served in this role for eighteen months but was fired by tweet shortly after Trump’s election loss to President Joe Biden.

Esper’s firing prompted media outcry, and some commentators highlighted the possibility that Trump might replace the Secretary of Defense with a loyalist who could use the military to keep him in power while he refused to concede the election.

In his lawsuit, Esper obliquely referenced these events, claiming that he had presided over “an unprecedented time of civil unrest, public health crises, growing threats abroad, Pentagon transformation, and a White House seemingly bent on circumventing the Constitution.”

Esper, who emphasized his role as an apolitical military officer and expressed reservations over the use of the military during the unrest in the summer of 2020 after the murder of George Floyd, frequently clashed with Trump, who criticized him for disloyalty. In particular, Esper apologized for his role in an incident near the White House, when demonstrators in Lafayette Park were tear-gassed soon before Trump and his entourage, including Esper, walked through. A later investigation suggested that the two events were not connected.

Esper’s lawsuit argues that significant portions of the memoir, which is set to be published in May, are being held improperly by the Defense Department. Although the Defense Department did not explicitly forbid Esper from publishing a book, it issued a series of restrictions and specifically asked him not to describe conversations he had had with Trump or quote the former president. Esper has pushed back against these restrictions, arguing that they would cause “a serious injustice to important moments in history that the American people need to know and understand.”

The Defense Department is responsible for scouring the manuscript for classified information, although Esper has insisted that the text does not contain any.

Pentagon spokesman John Kirby indicated that the department was aware of the case, but declined to comment on it, given the pending litigation.