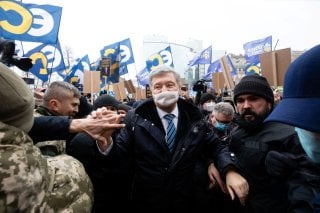 Petro Poroshenko, the first president elected after Ukraine’s Euromaidan Revolution of 2014, has returned to the country to face treason charges brought forth by the government of his successor Volodymyr Zelensky.

The former president arrived in Kiev on Monday. After a brief altercation with border guards who Poroshenko accused of taking his passport, he emerged to a cheering crowd outside the airport before departing to a courtroom in Kiev. While the former leader has been recommended for prosecution, he has not yet been arrested.

The charges against Poroshenko stem from a Ukrainian government investigation into the funding of Russian-backed separatists in the country’s eastern Donbass region, where a war has been fought since 2014. The investigation determined that coal mined in Donbass was illegally sold in the west, allegedly with Poroshenko’s approval. Because the proceeds of the scheme were used to fund rebel activity, Poroshenko could be charged with treason and face a fifteen-year prison sentence.

Poroshenko has described the charges as politically motivated and accused Zelensky’s government of infringing on judicial independence. His supporters have compared Zelensky’s actions to those of Viktor Yanukovych, Poroshenko’s pro-Russian predecessor, who prosecuted opposition leader and former Ukrainian prime minister Yulia Tymoshenko on charges that were later determined to be baseless.

During a break in the courtroom session, Poroshenko claimed that the Zelensky administration was “confused” and “weak.”

“Instead of fighting Putin, they are trying to fight us,” Poroshenko said.

While most outside observers have not commented on the veracity of the charges against Poroshenko, many have cautioned that his prosecution is a distraction from the looming threat posed by the Russian troops on Ukraine’s eastern border.

As that crisis has continued, Ukraine has sought diplomatic support from the West and increased cooperation with NATO. Although many Western governments have promised economic sanctions against Russia and increased weapons sales to Ukraine in the event of an invasion, none have yet promised direct military intervention.

Poroshenko, a billionaire nicknamed the “Chocolate King” for his dominance of Ukraine’s confection industry, was annihilated by Zelensky in the country’s 2019 election, losing by a nearly 50-point margin to the former comedian and opposition activist. However, he and his “European Solidarity” party have retained a loyal base of support within Ukraine.