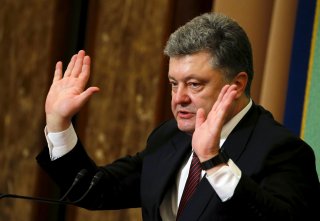 Former president of Ukraine Petro Poroshenko was placed under criminal investigation on Monday on charges of treason and financing terrorism.

A prominent businessman and opposition activist, Poroshenko served as a leader of the Euromaidan protests of early 2014, which sent pro-Russian president Victor Yanukovich into exile. In the country’s May 2014 election, he decisively defeated fellow opposition candidate Yulia Tymoshenko and led the country for the next five years, until his equally decisive loss to former actor Volodymyr Zelensky in 2019.

Poroshenko was accused of taking part in an illegal coal-purchasing scheme, which took place during his presidency. During that time period, coal was bought from areas under rebel control in Ukraine’s eastern Donbass region and sold in the country’s west. The finances were then used to support pro-Russian rebels in the area, leading to charges of treason.

Coal mining is one of eastern Ukraine’s largest industries, and the country’s coal is concentrated in the Donets Basin area–an area now under the control of the Donetsk People’s Republic, a pro-Russian separatist proto-state. The 2014 uprisings in the country’s east led to a coal shortage in western Ukraine, and some pro-Russian leaders have been accused of intentionally obstructing coal purchases from Europe as part of the plot.

Also, Victor Medvechuk, a prominent pro-Russian politician and a close ally of Russian leader Vladimir Putin, was arrested for his role in leading the plot. Medvechuk’s “Opposition Platform–For Life” party is the second-largest in Ukraine’s parliament, after Zelensky’s “Servant of the People”; its remaining leaders condemned Medvechuk’s arrest and accused Ukrainian authorities of political motivations.

Poroshenko’s allies in the smaller “European Solidarity” party, which the former president leads, were similarly critical. Oleksander Turchynov, a senior European Solidarity official, argued that the charges against Poroshenko were fabricated and had been ordered by Zelensky to discredit a potential political opponent.

While Russia did not immediately comment on the accusations against Poroshenko, the former president has been harshly criticized in the Russian press since 2014–particularly after he invited U.S. troops to Ukraine to train Kiev’s military in 2015.

Poroshenko could face up to fifteen years in prison if he is convicted. Ukrainian officials were unable to take him into custody, as he had left the country to participate in an international conference in Poland. However, in the aftermath of the criminal accusation, he indicated on Facebook that he would return to Ukraine in January to defend himself.