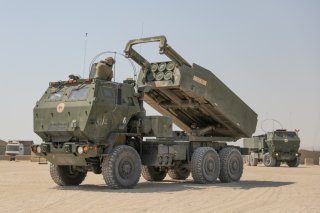 The U.S. Army Europe and Africa (USAREUR-AF) command announced on Sunday that it had deployed two M142 High Mobility Artillery Rocket Systems, or HIMARS, to Latvia in order to take part in an upcoming exercise in the country.

The missile systems arrived in the small Baltic state on Monday, accompanied by “approximately a dozen” personnel, according to a USAREUR-AF statement. The military command indicated that the group would participate in the ongoing NAMEJS military exercises on September 26 and 27 in order to demonstrate the system’s rapid deployment to NATO’s eastern border.

“NAMEJS is designed to increase readiness, lethality, modernization and interoperability by exercising U.S. Army Europe and Africa’s ability to rapidly deploy long-range precision fire capabilities in coordination with our allies and partners, and integrate joint fires in a multinational environment,” the statement read. The systems will be deployed alongside the Norwegian Advanced Surface to Air Missile System, or NASAMS, provided by the Spanish armed forces during the exercises.

The exercises have come amid raised tensions between NATO and Russia, and have been overshadowed by the war in Ukraine. Although none of the public statements issued by NATO member states with regard to NAMEJS and the related Silver Arrow exercises in Latvia have mentioned Russia, they have repeatedly stressed that the purpose of the exercises is to strengthen NATO’s eastern flank, which is adjacent to Russia. Latvia is currently one of five NATO countries that directly border Russia, alongside Norway, Estonia, Lithuania, and Poland. If Finland is admitted to the alliance, it would become the sixth such country and would dramatically expand the alliance’s border with Russia, roughly doubling it and placing NATO territory within striking distance of Saint Petersburg, Russia’s second-largest city.

Although it appears that the HIMARS batteries deployed to Latvia will be returned to the United States after the exercises are completed, the Latvian government has previously indicated an interest in purchasing the systems from Washington—particularly following their use against invading Russian forces in Ukraine to devastating effect. Latvian defense minister Artis Pabriks claimed on Monday that the government sought to purchase “fewer than ten” HIMARS batteries from the United States, according to the Baltic Times.

Following significant setbacks for the Russian military in Ukraine, Russian leader Vladimir Putin announced last week that the Kremlin would draft 300,000 reservists to take part in the Russian war on Ukraine—an announcement that has led to street protests and emigration from Russia into neighboring countries such as Kazakhstan and Armenia.