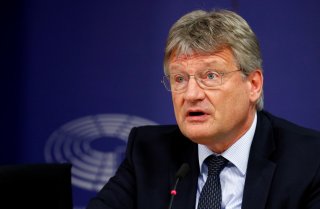 The far-right Alternative for Germany (AfD) party announced on Wednesday that German police had raided its national headquarters in Berlin, searching the building and making copies of “complete hard disks, mailboxes, and file folders,” according to Germany’s state-run Deutsche Welle news agency.

“Since this morning, the Berlin prosecutor’s office has been conducting a house search in the premises of the federal headquarters of Alternative for Germany, without any prior inquiry having been directed to the AfD regarding the facts to be clarified,” the party’s leadership said in a statement. The prosecutor’s office later confirmed the AfD’s announcement, announcing that it had taken “documents and data carriers [from the building], which are now being evaluated in the course of an ongoing investigation.” In addition to searching the AfD’s offices, the Berlin police reportedly also searched six other locations in the capital and across three other German states.

Germany’s ARD public broadcaster indicated later in the day that the German police had searched the building in an attempt to access the email account of the party’s former chairman, Jorg Meuthen, who held that position from 2015 until his resignation in early 2022. Both Meuthen and the party’s treasurer, Klaus-Guenther Fohrmann, have been accused of making false statements and attempting to hide information about party donors in the AfD’s official accountability reports to parliament during the years 2016, 2017, and 2018, according to a statement released by the prosecutor’s office.

After the investigation became known, Meuthen’s parliamentary immunity from arrest was revoked in February, allowing German police to formally charge him. However, they have not yet done so.

The party’s current co-leaders, Alice Weidel and Tino Chrupalla, each condemned the raid in separate statements. Weidel described it as a “highly unusual and disproportionate measure” intended to intimidate the AfD’s supporters, while Chrupalla insisted that the party would have cooperated with investigators if they had requested information about Meuthen and Fohrmann beforehand.

Established in 2013 as a political coalition opposed to Muslim migration to Europe, the AfD has since broadened its agenda, encouraging German nationalism and opposition to the European Union (EU) but largely avoiding apologizing for Germany’s past, which has led the country’s government to ban other parties on the extreme right. The AfD has consequently emerged as Germany’s most successful far-right party in decades, holding eighty out of 736 seats in the Bundestag, the country’s lower house of parliament.