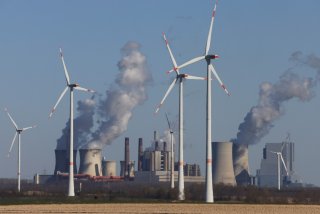 The West’s response to Russia’s invasion of Ukraine has been hamstrung by Europe’s dependence on Russian natural gas. This is the result of a conscious European strategy to prevent a geopolitical rivalry with Moscow through economic integration. While the failure of this strategy has upended Europe’s security architecture, a golden opportunity has emerged for Europe to drastically reform its energy security model. As Alexander Mirtchev, vice-chair of the Atlantic Council and a geo-economics guru, suggests in his 2021 book The Prologue: Alternative Energy Megatrend in the Age of Great Power Competition, this is a chance for Europe to diversify its energy suppliers and gradually move beyond fossil fuels towards alternative energy sources.

On July 7, Kazakhstan’s president, Kassym-Jomart Tokayev, ordered a study into the construction of a pipeline across the Caspian Sea that would ferry Kazakh crude to the European market. The move came a day after a Russian court ordered a month-long shutdown of the Caspian Pipeline Consortium, which transports oil from Kazakhstan’s Tengiz field through Russia to the Black Sea. Earlier this month, the International Energy Agency (IEA) announced that the United States is exporting more liquified natural gas to Europe than Russia. IEA executive director Fatih Birol noted in a tweet that “Russia’s recent steep cuts in natural gas flows to the EU mean this is the first month in history in which the EU has imported more gas via LNG from the US than via pipeline from Russia.”

The American saying “if it ain’t broke, don’t fix it” summarizes much of the West’s approach to Russia since 1991 and also explains much of its malaise. The end of the Cold War and the rise of globalization, combined with a Russia that for a while appeared far less adversarial than its communist iteration, brought relief. This was a Russia the world could do business with. Even after Vladimir Putin became president in 2000, his KGB past, authoritarian backsliding, and aggressive rhetoric that insisted on Russia's restoration as a global power did not deter the West. Similar to the case of China, there was a belief that Russia could be tamed through engagement. Russia’s macroeconomic decline in the 1990s combined with its dependency on commodity exports only reinforced this notion.

This assessment was further informed by the fact that while the Putin regime was working to revive Russia as a great power that could challenge, and even undermine, Western interests and the international system, there were more pressing concerns to worry about, such as the wars in Iraq and Afghanistan and the impact of the Great Recession. There was no bandwidth to focus on a preemptive strategy to decrease reliance on Russian natural gas supplies even though, as early as the mid-2000s, Russia began to weaponize its position as Europe’s natural gas supplier and repeatedly shut off pipelines going through Ukraine.

The 2014 Revolution of Dignity, also known as the Euromaidan Revolution, saw the collapse of the pro-Russian regime in Kyiv and Ukraine’s hard tilt to the West. Despite Russian actions in Chechnya, Georgia, and Syria, there was still no urgency in the West to invest in easily accessible non-Russian sources of natural gas in Africa, the Caucasus, Central Asia, or the Mediterranean basin. Even Russia’s annexation of Crimea and the war in Donbass region did not wake the West up. It was only on February 24, 2022, as Kyiv shuddered from Russian bombs, that the West realized the shortcomings of its strategy toward Russia.

The war in Ukraine has sent the West scrambling to find alternatives to Russian natural gas. Despite its urgency, levying sanctions against the Russian natural gas industry has proven difficult. Additionally, the financial and logistical challenges of securing alternative natural gas supplies from Turkmenistan, the Persian Gulf, and Africa have stymied efforts to diversify European imports.

This is the kind of tragic but pivotal moment that Mirtchev identified in The Prologue, a book that has earned praise from leading foreign policy practitioners such as former Secretary of State Henry Kissinger and former U.S. intelligence chief William Webster. Mirtchev masterfully explains how a rapidly changing global technological environment coupled with the growing demand for energy is reshaping great power competition and pushing the world far beyond the confines of fossil fuel use. Mirthchev’s in-depth assessment is all the more pertinent today given that it predicted many of the shortcomings of Russian energy dependence and the efforts needed to meet the growing challenge from China, a process that has been disrupted by the need to counter Russian aggression in Ukraine.

Mirtchev also expounds on the notion of an “alternative energy megatrend,” which is particularly relevant as the United States, China, and Europe compete for domination in the electric vehicle market. Harnessing alternative sources of energy to fuel electric vehicle development and growth is mired in complexity, especially given China’s dominant role in battery production, the rare earth mineral supply chain, and lithium refinement. Dealing with Russia and China acquires an entirely new meaning when considering how much the West is caught between the hydrocarbon era and the green age. The world will remain in this transition phase for a long time because, as Mirtchev rightfully points out, there is a great deal of work to be done to improve energy storage, supply chains, distribution networks, and the management of alternative energy.

Today, the West must also secure alternative sources of hydrocarbons as the Russo-Ukrainian War, along with increased consumer demand, has driven energy prices higher. Dealing with the traditional exporters of oil and gas, however, has become a policy challenge, as evidenced by the Biden administration’s efforts to reset relations with Saudi Arabia and the United Arab Emirates. There are also implications for energy policy in the Biden administration’s efforts to save the nuclear agreement with Iran, not to mention the associated geopolitical costs of doing business with Tehran and the uncertainties associated with its domestic political evolution. The bottom line is that to make progress in developing alternative energy sources, the West must first diversify its fossil fuel imports. Insecurity caused by hydrocarbon supply disruptions will undermine the efforts to shift toward renewable sources of energy. Policymakers will have to navigate these treacherous shoals to help secure a safer and more sustainable future for our planet.

Kamran Bokhari, PhD, is the Director of Analytical Development at the New Lines Institute for Strategy & Policy in Washington. Bokhari is also a national security and foreign policy specialist at the University of Ottawa’s Professional Development Institute. He has served as the coordinator for Central Asia Studies at the U.S. Department of State’s Foreign Service Institute (FSI). Follow him on Twitter at @KamranBokhari.