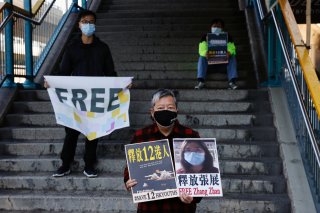 Reporters Without Borders, an international organization that examines press freedom around the world, moved Hong Kong to 148th place on its annual index of press freedom in 2022—a drop of almost seventy places amid a widespread crackdown on independent media in the “special administrative region” in southern China.

Reporters Without Borders attributed the drop to the imposition of a new national security law by the Chinese government in 2020 that sharply restricted criticism of the Chinese government and equated it with subversion. Over the past two years, Hong Kong has also revived several anti-sedition laws, which can be broadly applied to most forms of criticism, and prohibited advocating for the overthrow of the government.

Since the passage of the national security law, three prominent independent news outlets in Hong Kong, including the Apple Daily, have been forced to close, and at least twelve journalists and media producers have been imprisoned. In December 2021, Jimmy Lai, the publisher of the Apple Daily, was convicted of participating in a memorial for the victims of the Tiananmen Square incident and was later sentenced to thirteen months in prison, in addition to an earlier sentence for his participation in Hong Kong’s 2019 protest movement.

Under British rule, Hong Kong was widely regarded as a beacon for press freedom in East Asia, and the sedition laws were rarely enforced against the press. In 2002, five years after Britain handed the territory over to China, Hong Kong was ranked eighteenth in the world, ahead of several countries in western Europe. Over the following two decades, particularly after crackdowns against successive protest movements in 2014 and 2019, Hong Kong plummeted on the list; its current position is immediately behind Sri Lanka and the Philippines.

Hong Kong’s leaders, including Chief Executive Carrie Lam, have dismissed allegations that press freedom has been impacted by the national security law. Lam claimed on Tuesday that press freedom in the territory was “as vibrant as ever,” noting the large number of international media organizations that continue to operate in Hong Kong.

However, Lam also stressed that “journalists [and] media organizations are not above the law.”

The shift in Hong Kong’s press freedom has come at the same time as a broader shift in its politics. After pro-Beijing lawmakers were decisively defeated in local elections in late 2019, the territory’s electoral rules were changed, sharply decreasing the number of directly elected seats and requiring candidates to swear a loyalty oath to Beijing before taking office. A subsequent “patriots only” election saw a much larger victory for the pro-Beijing camp, but it was also characterized by low turnout.