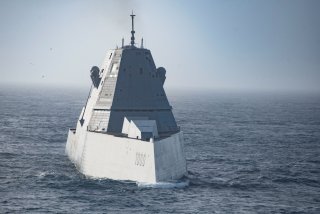 Can a massive surface destroyer—armed with Tomahawk missiles, deck-mounted guns, sensors, antennas, and heat-generating onboard electrical power—truly be considered stealthy? Tall masts, hull-mounted sensors, and protruding antennas aren’t usually considered stealthy, but these features were part of the technical starting point from which engineers launched into building a first-of-its-kind stealth warship.

Stealth attributes are just one of a number of defining characteristics of the much-discussed Zumwalt-class warships, perceived by many to represent the beginning of a transformational pivot into a new generation of warfare—one that includes laser weapons, artificial intelligence, expanded networking, and advanced sonar.

The technological advancements incorporated into Zumwalt-class ships include advanced computing systems, electrical power and emerging weapons integration, and, perhaps most notably, stealth breakthroughs. Just how possible is it to engineer a large destroyer that is significantly less visible to enemy radar?

Typically, when people think of the term stealth, they are drawn to images of fighter jets or sleek bombers. However, some of the central technical applications of these classic stealth systems can be found in Zumwalt-class destroyers.

Several years ago, during an earlier phase of the Zumwalt’s development, news reports, many of them citing Naval Sea Systems Command, claimed the destroyer looked like a small fishing boat during radar testing. When viewed through the lens of how stealth works, this result may be exactly what was intended. While a destroyer as large as the Zumwalt would be very unlikely to generate no return signal to enemy radar or sonar, its configuration seems designed to produce a rendering quite different than what it actually is, which would likely lead adversaries to become confused. This is, in concept, fully aligned with the intended effect of Air Force fighter jets and stealth bombers, which are designed to throw off enemy radar systems.

Taking a look at the external shape of the Zumwalt class, the ships lend themselves to a discussion of some of the fundamentals of stealth properties. First and foremost, when compared to other surface ships, its shape is entirely different. There are fewer edges, a conspicuous absence of protruding structures or varied contours, and a flat side, seamlessly attached to the upper deck of the ship on a straight, slightly angled linear surface. Instead of multiple sharp and intertwined steel panels and structures supporting an outward-facing radar system, the Zumwalt class’ front exterior shows only a few rounded edges. Its much-discussed wave-cutting tumblehome hull is narrower than existing destroyers, making it less detectable to enemy sonar.