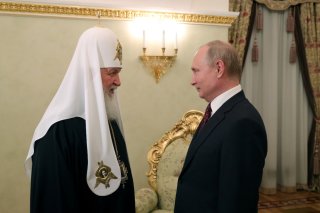 The Hungarian government has vetoed the sixth and most recent package of European Union (EU) sanctions against Russia over concern that the list included Patriarch Kirill of the Russian Orthodox Church, according to EU diplomats.

The sixth sanctions package, which was formally committed to writing on Wednesday, includes several new penalties against Russia as the war in Ukraine nears its hundredth day. The package bans Russian seaborne oil and refined petroleum product purchases by early 2023, disconnects Russia’s Sberbank from the SWIFT global banking transfer system, prohibits European companies from insuring Russian ships, and applies economic and travel sanctions to a new list of individuals.

However, three EU diplomats reported that Budapest objected to the presence of Patriarch Kirill on the list. It was not immediately clear why the Russian patriarch’s presence on the sanctions list was objectionable to Hungary, as the size of the country’s Orthodox population is insignificant.

Kirill, aged seventy-five, has led the Russian Orthodox Church since 2009. Throughout his tenure as the leader of Russia’s largest religious group, Kirill has been a vocal supporter of Russian leader Vladimir Putin and provided political and religious justifications for the “special military operation” in Ukraine shortly after it was launched in late February.

Hungary, whose government under Prime Minister Viktor Orban enjoyed cordial ties with Russia prior to the invasion of Ukraine, has been noticeably reluctant to adopt sanctions. In the weeks before the invasion, as Russian troops built up on the Ukrainian border in Russia and neighboring Belarus, Orban and Putin negotiated another multi-year gas deal for Hungary, and the European Union’s sanctions on Russia have provided exemptions for Budapest at the Hungarian leader’s insistence.

In spite of Hungary’s continued oil imports, the EU agreed to decrease Russian oil imports by roughly 90 percent by the end of the year. Russian natural gas has undergone a comparable decrease, although several European countries, notably Germany, continue to import it.

The Russian government has decried the EU’s economic sanctions and argued that they will have harmful economic implications for Europe.

“Sanctions will have a negative effect for Europe, us, and the whole global energy market,” Kremlin press secretary Dmitry Peskov told reporters on Wednesday. He added that Moscow would attempt to find alternative buyers for the oil and gas unsold in the European Union, although most of Russia’s pipeline infrastructure is devoted to servicing the European market and infrastructure built for other customers, such as China, does not have the capacity to handle large shipments of hydrocarbons.

Peskov stated that the Kremlin was in the process of taking “purposeful, systematic actions that will allow us to minimize the negative consequences.”