Icebreaker? Blinken to Meet With Chinese Foreign Minister at G20 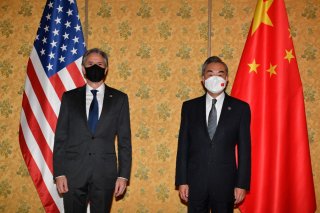 U.S. secretary of state Antony Blinken is scheduled to meet Chinese foreign minister Wang Yi on the sidelines of the upcoming Group of 20 (G20) meeting in Bali, Indonesia, later in the week, the Department of State announced on Tuesday.

“Secretary Blinken will first travel to Bali, Indonesia, to attend the G20 Foreign Ministers’ Meeting, where he will reinforce our commitment to working with international partners to confront global challenges, including food and energy insecurity and the threat Russia’s continued war against Ukraine presents to the international order,” State Department spokesman Ned Price announced in a press statement. Price indicated that Blinken would depart for Asia on Wednesday and return to the United States on Monday; the meeting between Blinken and Yi is expected to take place on Saturday. The G20 meeting is intended for the foreign ministers of the G20 countries; it comes four months in advance of the group’s second meeting in Indonesia, intended for the bloc’s leaders.

At the meeting, Blinken will also meet other diplomats from the G20 nations, including Indonesian foreign minister Retno Marsudi. Although Russian foreign minister Sergey Lavrov is slated to attend the meeting, it is unlikely that he and Blinken will engage during the summit; the two have not spoken since Russia’s invasion of Ukraine in late February. Lavrov is expected to defend Russia’s invasion of Ukraine at the meeting and blame the ensuing global food crisis on U.S. sanctions, while U.S. diplomats have previously faulted Russia’s invasion for decimating Ukraine’s ability to export grain to the developing world.

Although the U.S.-China relationship has steadily deteriorated over the past decade, Biden administration officials suggested that the United States might seek to lower or eliminate tariffs on some Chinese goods in an attempt to lower inflation. The White House has not provided a timetable for these plans, although Biden is expected to speak with Chinese leader Xi Jinping later in the summer. Treasury Secretary Janet Yellen also held a conversation with Chinese vice premier Liu He on Monday, during which the two officials discussed U.S. and Chinese tariffs and Chinese economic practices.

During his trip to Asia, Blinken is also slated to visit Thailand, where he will meet with Prime Minister Prayut Chan-o-cha, who has led the country at the head of a military junta since seizing power in a soft coup d’etat in 2014.