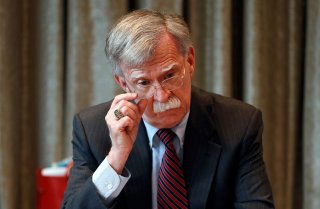 "The Room Where It Happened,” the new memoir by former National Security Advisor John Bolton that's set for release today, has been highly controversial ever since it was first announced. The Trump administration even went to court last week seeking to block publication of the book — unsuccessfully — and it remains a possibility that if the book is found to contain classified material, the government could seize its profits.

The book, in which Bolton shares stories about his 17 months in the White House and is highly critical of President Trump, has also put liberal opponents of the president in something of a bind: They like seeing strident criticism of the president, but they don't particularly want to enrich a longtime conservative stalwart like Bolton.

The solution, for some? Rampant piracy.

According to the website TorrentFreak, "tens of thousands of downloads, if not more" of Bolton's book have appeared on torrent websites in the last week, with two different PDF versions of the book appearing at the top of The Pirate Bay's list of the most downloaded books. A leak-publishing group called Distributed Denial of Secrets, which distributed a copy of Bolton’s memoir, has dealt with so much demand for the pirated book, in fact, that its server "nearly ground to a halt."

Other versions of "The Room Where It Happened" have been distributed via Google Drive and other methods.

Meanwhile, publisher Simon and Schuster, while simultaneously fighting efforts by the government to stop the book's publication, has now pivoted to filing countless takedown notices for those illegally distributing the book.

The National Interest obtained an advance copy of the book. In it, the former national security adviser shares disagreements he had with other members of the Trump Administration, including Secretary of State Mike Pompeo, former Secretary of Defense James Mattis and former U.N. Ambassador Nikki Haley, while also discussing his opposition to the Iran nuclear deal and President Trump's attempts to reach an arms control agreement with North Korea.

Bolton, in the book and in recent television interviews, has also shared stories about the president being easily distracted, and lacking basic knowledge about the world.

The book's title, "The Room Where It Happened," is a reference to a song in Lin Manuel Miranda's popular musical "Hamilton."

John Bolton Is Back. And So Are His Dangerous Ideas.