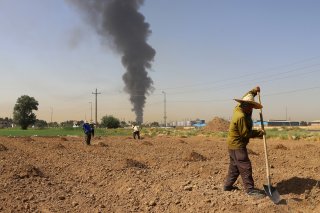 Protests have erupted in Isfahan, a city in central Iran, after popular discontent over a water shortage led the city’s residents to demand that a depleted river through the city be re-irrigated by the government.

The protests were covered on Iranian state-run television. They took place on the dried bank of the Zayanderud River, a major river on the Iranian plateau. Although the Zayanderud formerly flowed year-round through Isfahan, diversion of upstream water for agriculture and industry has led it to regularly run dry by the summer in the modern era. This has angered farmers in Isfahan, who have protested against the government-made drought and sometimes acted to sabotage water pipelines leading from the Zayanderud to other areas.

The country’s energy minister, Ali Akbar Mehrabian, apologized for the water shortages but did not indicate what actions would be taken to correct them.

“I apologize to all of our dear farmers, and I feel ashamed for not being able to provide the water needed for their crops,” the minister admitted on state-run television. “With God's help, I hope we can overcome these shortcomings in the next few months.”

Through a combination of the effects of climate change and human mismanagement, water shortages have become an endemic problem within Iran over the past decade. This has led to significant economic turmoil; fall of output in hydroelectric dams has led to power shortages, and because of the drought, the country has needed to import record amounts of grain from foreign countries in order to feed its people. These factors have also resulted in major popular protests. During the summer, the country’s southwestern Khuzestan province saw the violent repression of demonstrations over a lack of water that reportedly resulted in the deaths of at least four Iranian citizens.

The water and power crisis has been an early test of the leadership of President Ebrahim Raisi, who assumed the country’s presidency in August after a vote widely condemned as non-competitive after all viable opposition candidates were disqualified. While the overarching water crisis did not begin with Raisi, he has taken public steps to combat it; since the onset of protests, he has met with environmental experts, and First Vice President Mohammad Mokhber spoke directly to the protesters in Isfahan, claiming that the government was taking the water issue “seriously” and would soon have a viable solution. No details were offered on what that solution would entail.