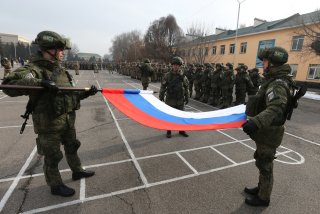 The last Russian soldiers departed Kazakhstan on Wednesday, two weeks after they were initially deployed to help put down a series of violent protests against the government of Kazakh president Kassym-Jomart Tokayev.

In a statement released on Wednesday, the Russian Ministry of Defense indicated that the last four planes carrying Russian troops and equipment had departed from Nur-Sultan, Kazakhstan’s capital, and Almaty, the country’s largest city. The transport planes ultimately landed in Ulyanovsk, a city in southern Russia.

"The last of the peacekeepers and the command of the Russian peacekeeping contingent headed by Colonel General Andrei Serdyukov will return home on these planes," the statement read.

The troops that deployed to Kazakhstan to quell the unrest were sent at Tokayev’s request under the auspices of the Collective Security Treaty Organization (CSTO), a Russian-led military alliance sometimes described as a “central Asian NATO.” Russian troops made up the lion’s share of the CSTO forces. Other participating nations, including Armenia, Belarus, Kyrgyzstan, and Tajikistan, withdrew their smaller contingents earlier in the week.

As Russian troops withdrew, the office of President Tokayev indicated that the country’s two-week state of emergency, during which a curfew and travel restrictions were imposed, had ended.

The protests, which began over the proposed elimination of certain fuel subsidies, quickly came to reflect Kazakhs’ broader frustrations over the country’s authoritarian rule. At least 225 people, including 19 members of the Kazakh security forces, were killed during the week-long unrest.

Although the protests did not succeed in overthrowing the government, they did lead to a number of concessions from the government, including the restoration of the fuel subsidies for six months. As part of the reforms, Tokayev also reshuffled his cabinet and received resignations from former President Nursultan Nazarbayev and other key officials.

Nazarbayev, who ruled Kazakhstan from 1990 to 2019, officially retired when he transferred power to Tokayev. However, he had maintained his post on the influential Security Council, allowing him to play a continued role in the country’s governance.

Rumors of a power struggle between Tokayev and Nazarbayev were dismissed on Wednesday by the former leader. Nazarbayev denied the existence of a conflict between him and Tokayev and claimed that his successor had “full control” over the government.

Prior to Russia’s exit, the country’s Western critics had cast doubt on whether the Kremlin’s troops would leave at Kazakhstan’s request. In an apparent reference to the continued presence of Russian forces in several of its neighboring countries, Secretary of State Antony Blinken noted that "once Russians are in your house, it's sometimes very difficult to get them to leave.”

However, the Russian government stated on Wednesday that it has no interest in interfering in Kazakhstan’s “internal affairs” and wishes to preserve “cordial relations” with the nation.