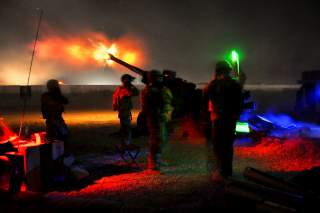 In February 2020, the Army Research Laboratory posted photos on Linkedin of a U.S.-UK event that inadvertently revealed a poster and toy-like plastic models detailing characteristics of a conceptual weapon.

The picture, which the Army took down after they had already been widely disseminated on social media, reveals clues as to a huge artillery system the Army is quietly developing called the Strategic Long Range Cannon (SLRC).

“Platform is comprised of a weapon, prime mover, and trailer, projectile and propelling charge…” It also reads “Range: Beyond 1,000 miles.”

Such a weapon would revive the tradition of the “super gun” designed to hit strategic targets far behind the frontline, starting with the German Paris Gun of World War I, continued with the Nazi V-3 super cannon intended to shell London from France, then the 1950s-era M65 atomic cannon, and seemingly reaching a dead end with the assassination of scientist Gerald Bull, who had been developing Babylon super guns for Saddam Hussein.

Even less extreme long-range tube artillery mostly fell out of fashion following the end of the Cold War. The Army retired its longer-range M107 and M110 self-propelled guns years ago, though North Korea and Russia do maintain some longer-range cannon artillery systems.

But in 2017, the U.S. Army revealed they were studying the development of a Strategic Long Range Cannon that could strike targets up to 1,150 miles away. This was part of a broader modernization drive for the long-neglected artillery branch, as discussed in this earlier article. Then, in October 2019, artillery modernization chief Col. John Rafferty told Defense News in an interview that the Army planned to begin early tests to determine the viability of the weapon at the Naval Support Facility in Dalhgren, Virginia.

The newly revealed miniature has a huge gun on a large trapezoidal mount, doubtlessly to absorb the recoil produced by such a powerful weapon. A prime mover—with a separate wheeled trailer attached on the opposite side of the mount—is used to tow the gun, consistent with an earlier remark that such a weapon would be “moveable” but not “mobile.”

It furthermore details that each complete gun system would be manned by eight personnel, that four guns systems would be grouped together in each battery, and that the guns would be designed for both sea and air transportability.

The degree of transportability is critical, as such an offensive strategic weapon could be highly controversial, meaning it might be politically difficult to deploy strategic guns on foreign soil until just before or at the start of a military crisis.

Why is the Army interested in such weapons given U.S. airpower seems a more traditional solution for such long-range strikes?

The photos show a leaked poster stating the cannon’s purpose is to “Penetrates and dis-integrates enemy anti access/area denial defenses to create windows of opportunity for exploitation by the Joint Force." It goes on that the system would be “…capable of delivering massed fires at strategic ranges for multi-domain operations.”

To cut through the jargon, the cannon’s job is to take out enemy long-range weapon systems that could prevent the Pentagon’s aircraft and ships from operating freely on the frontline. In the aforementioned interview, Rafferty elaborated “…integrated [air/sea defense] systems challenges even our most sophisticated aircraft and challenges our most sophisticated ships to gain access to the area.”

Even stealth jets cannot act with impunity over areas defended by modern integrated air defense systems in week one of a conflict. Ships at sea also are increasingly threatened by long-range land-based anti-ship missiles.

Thus, a long-range cannon could allow the Army to attack deep targets before defenses have been suppressed—and even help knockout radars, weapons batteries and command centers, “kicking open the door” for air and sea power to access the battlespace.

Such long-range reach—technically exceeding the un-air-refueled combat range of an F-35 stealth fighter—also limits the number of adversary aircraft, missiles, and artillery with adequate reach to launch a counterstrike.

Rafferty’s invocation of “multi-domain operations” is generally associated with the Army finding ways to help the Navy win control of the sea, and hints the weapon could have an application in the Pacific Ocean.

The bit about “massed fires” means that an SLRC battery is meant to make relatively high volume-of-fire attacks—between twelve and twenty projectiles in a single volley, based on the interview with Col. Rafferty. That, in turn, implies each individual shell would likely have to be significantly cheaper than a $1.4 million Tomahawk cruise missiles to affordably sustain a bombardment. In fact, the Army has commented that it envisions a cost of $400,000 to $500,000 per shell.

Based on a statement that the gun would simply use “scaled-up’ existing technology, it’s generally believed the SLRC project will be leveraging proven rocket-assisted projectile technology, though seeking to achieve distances an order of magnitude greater than can presently be achieved.

However, even though they may initially be propelled from the gun barrel by a powder charge rather than leaping into the sky using their own propulsion systems, shells with the multi-stage rocket boosters likely necessary to attain 1,000-mile plus range arguably begin to resemble cruise missiles, with at least some of the attendant costs.

Furthermore, each projectile would probably require some form of guidance—likely some combination of satellite-navigation, inertial guidance and/or electro-optical/infrared image-matching—to ensure enough accuracy to make the shell worth its price.

Making effective use of such a weapon would also require the Army deploy reconnaissance assets that can identify targets much deeper in enemy territory than it’s already equipped to do—though presumably, the Air Force might be able to offer some pointers or share assets for that purpose.

Army officials have also indicated in interviews they see the SLRC as an overlapping alternative technology path to a faster, more expensive 1,400-mile-range hypersonic missiles currently under development. In other words, while both systems would have different areas of strength, if one program fails in development, hopefully the other can take on most of its role.

The Army hopes to have a working prototype of the SLRC by 2023. Its performance will determine whether the strategic cannon moves on to become a program of record. The twenty-first century super gun’s viability will hinge not only on whether it can find a way to shoot a projectile out to such a long range, but whether it can do so at a cheap enough price that it compares favorably to existing and near-future alternatives.