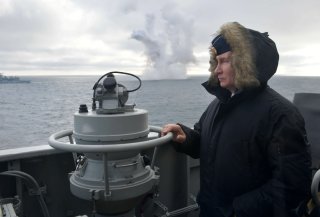 Western headlines have focused on Ukraine’s success in driving the Russian Army from the gates of Kyiv and Kharkiv. But as the battle for the Donbas still rages, another critical fight looms on the horizon following the Ukrainian administration’s announcement of a major southern counteroffensive. The fall of Mariupol and Russia’s ambition to occupy Ukraine’s southern Black Sea coastline pose a dangerous threat. Russia aims to control not just Ukraine, but the Black Sea itself.

Ukraine’s coastline—extending from “Transnistria” all the way to Mariupol and Crimea—represents a rich prize for Russia. Unable to take Kyiv or Kharkiv, but having established a land bridge to Crimea, Russia’s next big move is to take aim at what will do the most damage. Cutting off Ukraine’s access to the Black Sea would inflict a catastrophic economic and military blow and leave Ukraine a landlocked rump state.

This has been clear from Russia’s recent staged attacks against the so-called Transnistria Kremlin-aligned breakaway region, its intensified attacks against Odesa, its blockade of Ukraine’s seaports, and Moscow’s high appetite for taking over Mariupol.

Ukraine’s south provides the gateway to its economic arteries and holds significant resources. Through its Black Sea ports, Ukraine supplies countries in Africa and the Middle East with food, and the European Union with iron and steel. Ukraine’s economy is dependent on commodity exports, and those exports depend on access to the Black Sea.

Ukraine’s ferrous metals made 22.4 percent of its overall exports in 2021, according to the State Statistics Service of Ukraine, while grains and grain-related products made up about 30 percent of Ukraine’s overall exports. While some shipments can be shifted to rail, this will take time and will be costly and less efficient. In the meantime, Russia has been striking Ukrainian rail and transportation infrastructure.

By denying Ukraine access to the Black Sea, Russia holds a knife to Ukraine’s economic jugular, and in the process, holds hostage hungry people across the globe.

Ukraine’s south is home to a major part of Ukraine’s renewables sector, as many Western and Ukrainian companies have installed wind turbines and solar panels there due to the favorable wind and sun conditions. Two large nuclear plants are located in the south as well—the South Ukraine Nuclear Power Plant and Zaporizhzhia Nuclear Plant. The latter was on the brink of an international environmental and humanitarian disaster after Russian forces decided to bomb the site. The situation is still at high risk, as the Russians store weapons in the engine room of the first reactor.

Ukraine’s Black Sea coast holds rich deposits that are presently underdeveloped and estimated to be significantly larger than Ukraine’s trillion cubic meters of onshore gas reserves. Russia’s gas pipeline transits southern Ukraine just above Mykolayiv and Odesa, brushes Moldova, and exits Ukraine through Orlivka into Romania. A Russian takeover of this pipeline branch would provide one more strategic win for the Kremlin.

But perhaps the most unnoticed and important resource in the southeast is Ukraine’s rare earth mineral reserves—cobalt, copper, nickel, and lithium—which are thought to be hidden along the “Ukrainian Shield,” a geological formation that cuts diagonally through Ukraine from the upper western corner to the bottom southeast. Lithium, also known as “white gold,” arguably has the highest value, as it is essential for producing batteries used in solar panels, cell phones, electric vehicles, and military equipment.

Ukrainian researchers have suggested that Ukraine’s east potentially stores around 500,000 tons of lithium oxide. If proven, Ukraine would be home to one of the world’s largest lithium reserves, with the highest concentrations located near Mariupol. Rare earth elements are certainly a significant calculation in the Kremlin’s strategic military operation, according to Rod Schoonover, former director of the Environment and Natural Resources Section of the U.S. National Intelligence Council.

There is real business interest in Ukraine’s lithium deposits. The Australian company European Lithium stated back in November that it was securing rights to two Ukrainian lithium deposits. China has demonstrated interest in Ukraine’s lithium reserves, with Chinese company Chengxin Lithium applying for lithium rights in Donetsk and Kropivnytskyi. If Russia has full control of these deposits, it will have more negotiation power with China as well—both unsettling developments for Ukraine.

Control of Ukraine’s coast is vital to Russia’s control of the Black Sea. Ukraine and its partners must eschew any ceasefire agreement that enables Russia to solidify links between territories it is occupying, install puppet administrations, and cut off Ukraine from the sea.

Furthermore, Ukraine and the West must not fall into the trap of encouraging Ukraine to trade land for dubious Russian assurances of peace. Russia’s poor performance, Ukraine’s dogged resistance, and Western supplies mean that Russia’s current ability to occupy the entire Black Sea coast has diminished. But recent Kremlin-backed comments remind us that Russia retains the ambition for a big win.

Mariupol is particularly significant and must not remain in Russian hands. The heroes of Azovstal will live in history. But the city itself is too important of a symbolic and strategic win for Russia’s occupation to be allowed to stand.

Fortunately, with its hands full in the Donbas, Russia does not appear to be capable at present of mounting a new offensive, but there is no room for complacency. A Russian breakout from the Donbas quagmire and a successful southern offensive would threaten Ukraine’s very existence.

After having dismissed Russia’s warnings for years, the Transatlantic community must take seriously Russia’s stated ambitions, prepare to defeat a southern offensive, reestablish freedom of navigation in the Black Sea, and roll back Russia’s land grab.

This can be achieved by expediting heavy weapons deliveries to Ukraine from its partners, including an abundance of long-range missiles, High Mobility Artillery Rocket Systems (HIMARS) or their equivalent, fighter and bomber jets, and surface-to-air defense systems.

NATO itself must strengthen its presence in the Black Sea via Romania and Bulgaria and invest in ramping up Moldova’s security against a Russian invasion. Additionally, the United States and its partners should intensify sanctions against Russia to limit its fleet construction. It should also pressure countries such as India that are taking advantage of sanctions against Russia to increase their trade with the aggressor state.

Ilya Timtchenko is a Master of Public Policy candidate at the Harvard Kennedy School and a Belfer Young Leader Student Fellow at the Kennedy School’s Belfer Center as well as a Research Assistant for the Belfer Center’s Intelligence Project.