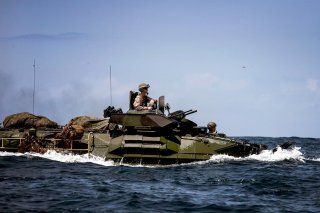 The concept with LAW is to enable multi-domain land-sea integrated operations, particularly in coastal or island areas where ship to shore weapons transport and attack may be of crucial importance. The new ship has primarily existed in the world of concept but is now moving into a new phase of development to include a Navy move to award five “concept design” contracts to shipbuilders. Many have taken note that the chosen shipbuilders are smaller companies potentially positioned to flex production and deliver high value at a lower cost than some of the large shipbuilding companies might be able to do. The Navy awarded deals to an Italian firm Fincantieri, Australia’s Austal USA, TAI Engineers, VT Halter Marine, and Bollinger Shipyards.

While smaller and lighter than existing big-deck amphibious warships, the LAW will likely be heavily armed. The U.S. Marine Corps is now testing an emerging multi-domain weapons concept called Ground-Based Anti-Ship Missile (GBASM), wherein the ship-fired Naval Strike Missile is configured to fire from land. The idea is that an amphibious force could, if transported by a lighter, faster, more expeditionary LAW, set up combat attack operations on islands or coastal areas quickly and then adjust as needed. The Corps has already conducted live-fire drills with the GBASM, which is a land-fired variant of the Raytheon-Kongsberg Naval Strike Missile.

The tactical concept here with an armed and highly mobile LAW seems specifically tailored for the kinds of amphibious warfare contingencies likely to unfold in the Pacific. The flashpoints for potential conflict are numerous, ranging from Chinese-Japanese disputes over the Senkaku Islands to Chinese pressure on Taiwan to a possible clash in the South China Sea. Should a Marine unit operate with an ability to set up fortified mini fire-bases of sorts from small island areas, they might be positioned to prevail against enemy surface ships and even larger scale amphibious attacks. Island-based artillery, long-range rockets or anti-ship missiles could potentially derail a Chinese amphibious assault upon Taiwan, by virtue of denying an ability to advance through heavy precision fire.

Given these factors, the LAW would shift the amphibious warfare paradigm away from more linear or traditional kinds of ship-to-shore attacks. Instead, the LAW would support the Navy’s modern Distributed Maritime Operations strategy based upon the tactical premise that newer kinds of sensors, submarines, long-range weapons, and multi-domain connectivity will continue to drive a need for more disaggregated, yet networked combat operations. This kind of approach, one that is envisioned for the mission scope of the Corp’s emerging LAW, would call upon and favor the multi-domain combat focus of the Corps, which in the case of the Pacific would likely want to operate with the agility to conduct land and sea operations in coordination with one another. Pockets of land weapons could be supplied with ammunition, Marines, and even air, surface, and sea-launched drones intended to support maritime warfare operations.