The Marine Corps Is Betting Big on Wargames 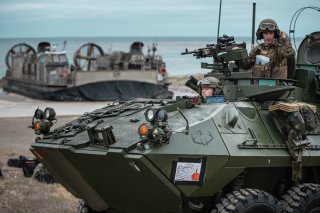 In an announcement, the Marine Corps explained that the “new Wargaming Cloud provides a library of digital wargames that faculty and students can leverage to support professional military education learning objectives. By making this capability available to resident students and faculty in a Cloud environment, the games can be played from distributed locations, to include from personal devices.”

It added that “this creates the opportunity to integrate wargaming to a much higher degree than at any time in the past and will contribute to increased repetitions in tactical, operational, and strategic decision-making.”

Though the U.S. military is no stranger to military wargaming, one American wargame recently made a splash in the media: an analysis of a hypothetical Chinese invasion of Taiwan.

In such a scenario, the United States would likely do a great deal to defend the small Asian democracy—and it might have to lean heavily on the Marine Corps.

Fighting the Chinese in the Pacific is a contingency for which the Corps is preparing. As part of the Force Design 2030 strategy, the Marines are shifting from a fighting force optimized for long, grinding campaigns in the Middle East to a lightweight, highly decentralized force that can track down and sink Chinese ships and submarines.

“While the capability is new, the concept of wargaming is a tested and true practice in the Marine Corps. Marines in every training and education continuum exercise various elements of wargaming to enhance individual and collective skills,” the Marine Corps’ statement explained.

“After assessing the initial implementation of the cloud, the Marine Corps will consider expanding this capability to non-resident students and Fleet Marine Force personnel for continuing education.”

The Marine Corps’ strategy empowers groups of Marines to sail throughout the Pacific and, by employing unique munitions, deny the Chinese the use of land.

“We conduct wargaming in a multitude of ways—and have been throughout our history,” said Brig. Gen. Hennigan, Marine Corps University President. “The difference with the new Wargaming Cloud is the ability to expand wargaming opportunities beyond the classroom. This offers Marines access to a library of digital games on their own time and at their own pace.”

“The modern battlefield is complex and dynamic,” said Hennigan. “Investments in capabilities like this ensure we remain skillful decision makers. Realistic training and challenging educational opportunities are critical to our success as warfighters and prepare us for the next fight.”