The Marines’ Newest Vehicle Will Be a Drone Warfare Juggernaut 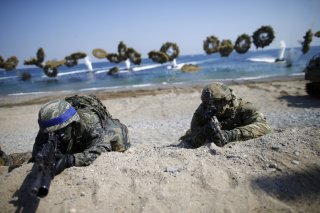 The service is now evaluating ARV prototypes from Textron and General Dynamics Land Systems to determine which is best suited to meet future Marine Corps warfare requirements. General Dynamics’ offering attempts to align with future Marine Corps needs by providing the capability to launch reconnaissance and attack drones from the vehicle itself. This will prepare the platform for manned-unmanned teaming, which will allow the Marine Corps to extend its surveillance reach even deeper into highly contested enemy territory.

The manned-unmanned teaming concept of operation, now being pursued, tested, and implemented across the military services, is fundamental to the vision outlined in the Marine Corps’ Force Design 2030 strategy. The document calls for the elimination of tanks and other heavy platforms in favor of faster, more deployable amphibious systems and weapons. Part of the rationale is in some ways based on the fighting in Ukraine, where dispersed, fast-moving fighters armed with anti-armor weapons have been able to prevail in ambushes and hit-and-run attacks against heavy armor. These tactics have often been enabled by small vehicles or hand-launched surveillance drones capable of identifying approaching enemy forces.

“As a ‘stand-in’ force of the future, the Marine Corps requires a family of UAS [Unmanned Aerial Systems] capabilities. We need to transition from our current UAS platforms to capabilities that can operate from ship, from shore, and be able to employ both collection and lethal payloads. These future capabilities must be expeditionary and fully compatible with Navy platforms and command and control networks,” Marine Corps Commandant Gen. David Berger wrote in the Force Design 2030 strategy.

General Dynamics’ ARV offering may be able to do just that. “UAS being launched from the ARV can go out to a distance to target or collect enemy information. We use sensors both on and off the vehicle, as we underwent testing for some of the networking and cyber functions. The vehicle performed well,” said Phil Skuta, General Dynamics Land Systems’ director of strategy and business development for the U.S. Marine Corps and Navy.